Galvin La Chapelle is one of the more unique starred restaurants in design as it was formlery a parish hall and gymnasium, built in 1890 and is now a Grade 2 listed building with a vast ceiling and area upstairs overlooking the restaurant.  This is the sister restaurant to Galvin at Windows at the top of the Hilton Hotel in Park Lane and La Chapelle still sports a lunch set menu at £34.50 for three courses (£29 for 2) which will work out at just over £38 for the three courses with the optional 12.5% gratuity.  This is higher than the average Michelin starred set menu band and all things considered, unfortunately this set menu seemed lackadasical.  Simplicity is good but it must be punchy at the same time which sadly this one ultimately was not.  One course was actively disappointing within this equation and it was good of the management to voluntarily take this off the bill and I sensed an admission that they were perhaps aware that this particular menu was not up to speed.  Full details at the expansion button and the summary is I was hoping for a better advert for set menus.

To begin, the home made bread was quite dense and served cold and whilst that does certainly not mean worse, it was disappointing to have butter that was rock hard to go with.  This was a very basic mistake for a Michelin starred restaurant and not a good opening.  Olives at the table were very soft and simple but were not packing a huge amount of flavour in comparison to others that I have had, particularly at Murano and The West House.

What was excellent however was the vichyssoise – a form of  soup made from leaks, potato, onion and cream and this one was super smooth and balanced beautifully as the surrounding to the salt cod brandade (salt cod whipped with olive oil and potato fried in breadcrumbs) and crème fraiche.  This was a lovely dish although, comparative to other Michelin starred venues, it did seem strange to not have any form of snacks or amuse bouche.

The hand made linguine and pied blue mushrooms was good to have and  there was a deliberate firmness to the mushrooms to give the linguine a little more texture and I enjoyed the crispy black olive crumbs on top, but at the same time it was a fairly straight forward main as it was basically the pasta and mushrooms with mushroom foam / sauce.  This simmered as a comforting dish only.

It’s been a while since I had an Eton Mess so I went for this and again, nothing hugely complicated as it was soaked strawberries, with piped vanilla cream and meringue.  The cream was done beautifully and I liked the way that there was not too much to allow the strawberries to do most of the talking but sadly the quality of the strawberries varied a lot from nicely ripe to sour and unappealing.  There is only do much that can be done with an Eton mess but the key would be to make each bit as excellent as possible and I just got the sense that not a huge effort had gone in to this for a restaurant with the accolade of a star.

I never have an issue with simplicity but the if it is to be simple, the key is that it must be bursting with flavour.  When the latter does not happen it makes the effort a little bit of a waste.  Overall, it was not a devastating meal but had the management not voluntarily removed the price of the dessert, I would not ave felt good paying £38 (no drinks) for the three basic courses without any amuse bouche or pre-dessert which the establishment would clearly be able to do at its proficiency.  A miscellaneous point is that the chefs’ audible rantings in the open kitchen also puts the overall experience down a peg as this can make diners uncomfortable.  I was very grateful for the management adjusting the price of the meal based on the dessert not being particularly brilliant, but with regret, I have to say that this did not remind me of a Michelin starred meal and the clever additions that can so often be found were missed at the same time.

Lunch bill for 1 (no drinks)

Without being too harsh on Galvin La Chapelle, it is a very nice place but the plus and minus summary I think captures it concisely.  It is a little out of the way and the area is somewhat barren in the financial district that it is, however inside the restaurant, you are greeted by friendly service and a very elegant interior.  Outside dining is possible in the summer months and this is a nice bonus in their fenced-off garden area, and the restaurant is perfectly good for set menu lunches in terms of value in any season.  The cooking is as one would expect for having a 1 star in that it is precise and carefully presented – just a shame I’ve never walked away punching the air over the flavours as it’d never happened yet.  A safe bet though for trying somewhere new. 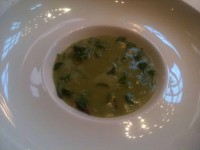 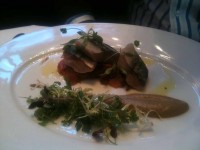 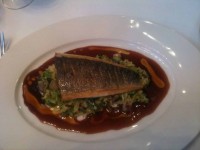 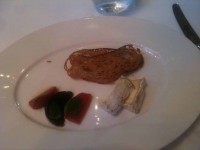 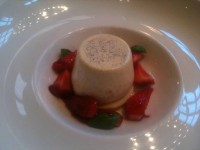 Minimum requirement feel for the food.