Sunday lunch here was befitting for the venue, in that the style of cooking was simple and generally pleasing but regrettably was only that at its maximum.  The haddock with mustard sauce on poached egg was a lovely starter and the roast beef main wonderfly tender with pitch-perfect vegetables but a rather hard Yorkshire pudding and a gravy that seemed a little flat.  Dessert of eggy brioche with banana sorbet didn’t quite work for me as I couldn’t taste the banana in the sorbet very much, the eggy bread was a tad too plain and the only element that lifted things was the pineapple.

I could not help think of other Michelin starred venues that had given more return on a set lunch menu and the fact that the dining room is so small that it was evident when other diners were actively listening to other diners (something I cannot stand) and such is the tiny amount of space available for the few tables, that those in were generally forced to have whispering conversations.  In fact, this did actually make for an uncomfortable atmosphere on a couple of occasions.

However, I am not a stranger to this and I can understand that in close confines, someone dining on their own may look a little strange… understandable that some will not know the rationale behind doing so rests with writing for a website.  The last time I was in confines such as this was at Harry’s Place just outside Grantham where there are 3 tables however, you go there in this expectation.

Clearly the cooking was considered at the Neptune Inn and was run with warmth but for me, the food was lacking on this visit compared with other Michelin starred venues and I would simply recommend going with the expectation of a quiet dining occasion.

Roast beef with all trimmings 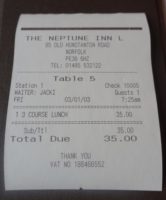