A return to where it all began!  Over ten years ago, my delight with food was taken to new levels by a chance celebration meal at Arzak and therefore how could I not come back on another visit to San Sebastian?  I was amazed to see some of the same floor staff and was another lovely experience to see Exec chef Juan Mari Arzak greeting all the tables again with his interpreter through the meal.  Whilst this time was a seeming notch down from the sheer explosions that occurred on my first visit, this was still by no means a wasted afternoon.  The €501 for two people with drinks throughout seemed a fair price based on all aspects received but something told me that its cutting edge has perhaps taken a back seat in recent times.  Juan Mari’s daughter, Elena is constantly trying to inject more modernity in to the cooking whilst her father leans more to tradition, but either way, this three Michelin starred restaurant still had moments of grand quality – more of them would have been even better.

Our visit found the restaurant surrounded in scaffolding owing to the face lift it is about to endure.  This is probably no bad thing and I think that also signals the heyday of Arzak is in need of revitalising, which is good to see after looking exactly as it has been for the last 4 decades.   A tour of the wine cellar, kitchen and laboratory was given at the start and the meal broke down to choices of a la carte with an average price of €150 for three courses of the tasting menu of roughly 9 courses for €210.  My dining companion had not eaten in a current 3 Michelin starred restaurant before so we opted for the tasting menu for maximum designs.

An array of nibbles were produced including Cecina ham with olives and grapefruit, a black pudding ‘rod’, prawn gyoza and banana and squid snacks.  Whilst nicely designed I was pretty astounded how the coil on the plate of the latter turned out not to be an intricately designed edible rack but made of metal and therefore put on for visual effect which seemed quite a bit of a short cut for a 3 Michelin starred restaurant.  Not the end of the world, but a definite, minor shock and the snacks themselves being pleasant enough.

The opening fish of the day which turned out to be mackerel marinated with Patxaran (a Basque sloe-liquor) and sprinkled with purple corn dust was a superb dish with the mackerel showing superior quality and flavour with its supporting sauce, although I could not taste the purple corn dust at all.  Squid with peach and assorted nuts was very fresh but no huge celebrations caused at this dish.  The poached egg with tomato candy was however, another belter of a dish – delicately handled and with an interesting level of sweetness from the tomato candy which married together very well.

Based on my first visit, I could not resist the opportunity to see how the roasted foie gras (from duck) was so I ordered this as an additional course.  No figs this time but a very nicely done vegetable ‘green’ sauce and with a berry coulis providing the sweetness that it needed.  Obviously not as biblical as my first eye-opener and I have had many versions since 2007 and this fared in the pleasurable bracket.

Next up were the mains and both the lamb and pigeon were of very good quality and judgement, but it was the stock jus for both of them stealing the entire show with the pigeon jus being among the deepest and very best I have ever had.  This was clearly wonderful quality, and the supporting mandarin and fruits with onion for the pigeon was an interesting mix.  The lamb itself showing very good flavour and as a bonus, a small portion of the beef was provided which was equally nice to have but did not compete overall with the former two (probably the reason they were selected for the tasting menu).

A ‘frosted’ pre-dessert of green tea granita, mint, raspberry and tomato sorbet with Brazilian citrus certainly did its job of cleansing the palate.   The chocolate cube with liquid mint, kiwi and neroli (oil from a bitter orange tree) was luxurious as a dessert and I opted for a different dessert to see another.  I was intrigued by the skate dessert, which turned out to be Vietnamese chocolate with liquorice ‘nuts and bolts’, literally on a piece of a skateboard.  No doubt #wewantplates will delight in adding this to their arsenal, but I honestly don’t have an issue with this – what’s reigns as the most important factor is the flavour!  Visually, it is always interesting to have something different but it won’t affect the success of the dish when dining and my senses enjoyed the soft handling of the liquorice and chocolate on this dish but the mango caramel puree was a touch too sweet to enjoy, whether on a skate or not, but the gooseberry ice cream (from India) was very good.

At the finish of the meal were perhaps the most pretty and delicious chocolate petits fours I have ever had.  Both at the table did not take long to know this after shoving one the little frogs in the mouth and I have somewhat gone off milk chocolate in recent times (in favour of dark) but these were outstanding.  The icing on the cake was talking to Juan Mari Arzak afterwards and learning how his respect for ingredients was still very much at the heart of what he has and still enjoys.

I walked away from Arzak for the second time pleased as punch to have come back and objectively, it was never going to be the same experience as my first, but comparing it with the other twenty two 3 Michelin starred restaurants that I have now been to in the world, it was fair priced experience with some great moments but not as strong as numerous other 3 Michelin starred restaurants out there today. 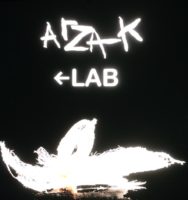 Entrance to the Lab

Squid with peach and assorted nuts

Pigeon with mandarin and onion

Juan Mari Arzak on his rounds 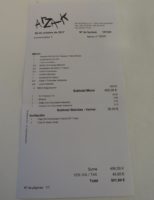 The lunch bill for 2 (with drinks)

Regrettably this was experienced so many years ago that it was done at a time when food was appreciated but not to the degree it is now, hence not many photos being taken.  This meal was utterly significant in that best bud and myself have virtually pinpointed this meal to being the birth point of our real passion with food beginning to take off.  The food here was sensational from the warm foie gras on figs with fig oil which filled my heart with joy to the strawberry soup with truffled chocolate balls which were the size of maltesers but had the consistency of egg yolk when burst in the mouth and is still discussed to this day as an all-time great.  The remaining dishes were utterly doable in every way.  However, this and the other two 3 Michelin starred venues that exist in San Sebastian now need to be done with ‘adult’ senses and if anyone is unaware of this region of NE Spain, I would strongly recommend looking in to it as one of the best food locations on the planet. 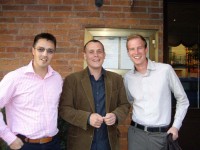 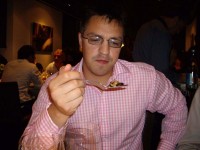 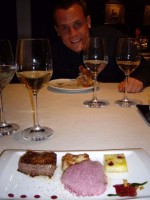 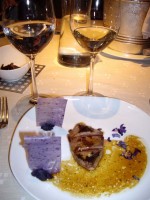 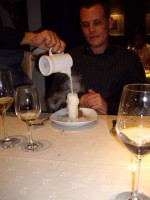