This was my second experience of BA First class food and this time in the First class lounge rather than Concorde lounge after a lucky upgrade by a friend who is a gold member also flying in business (NB: you can only access the Concorde lounge if you are flying First).  The glazed brioche burger had on this occasion came with well-done bacon (poor chips though and more effort could easily be made on these) and the truffled macaroni had a pleasing parmesan crisp on the side for texture and cheese boost.  As an aside note, the onboard business, the celeriac veloute with picked mushrooms was actually very good and truffled cheese and mushroom tortellini had a very nicely salted pumpkin puree to go along with it.  The food in the First class lounge was pleasant but I am still seeking a First lounge where the food is actually on par with a fine restaurant – so far no airline I have done in First (Emirates, Cathay Pacific and BA) has achieved this as yet.  I will keep looking whenever I am lucky enough to drop in and keep reporting back. 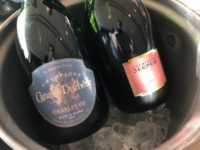 On board business class celeriac veloute

Sandwich selection (on board business flight)

If I am ever lucky enough to fly in First Class, I am always keen to see how the airlines and their lounges are at the uppermost end.  Unfortunately, I was pretty disappointed with this breakfast in the Concorde lounge of British Airways.  It is probably the most alluring lounge I have ever been in and the bright and airy design is stunning.  Sadly the same cannot be said for the eggs benedict which was served rather messily on sourdough with too much ham hock, scattered all over and a hollandaise that appeared and tasted to be from a bottle or pre-packaged.  I would be astounded if this was freshly made hollandaise and at best (if it was), it was not gloopy and without flavour and at worst (if it was not freshly made), this would be a travesty.   Tomatoes on the vine that are pan-fried will always be messy but it is possible to keep presentation levels up which I am simply shocked that this lounge simply did not appear to want to do.  Almost the only saving grace was the vegetarian sausage of rosemary which was lovely.  Meals on board in First class were better and are logged below.

Not all was bad in the lounge though I should mention, the hospitality was very good and I was delighted to see BA bring in the professional consultancy of Diego, formerly of the Waterside Inn who is guiding the staff with his professional oversight.  The photos of food on the flights from London to Shanghai and back again are outlined in the photos.

Champagne served in the lounge and on the flights I took were Laurent-Perrier Grand Siecle (Grand Century), multiple vintages using chardonnay and pinot noir grapes.  One of the meals consisted of pleasing canapes of Chinese style lightly salted fish, foie gras praline and camembert with truffled apricot glaze.  These were the most impressive canapes I have seen on an air flight in a while.

On the way out a fillet of beef with red wine jus and dauphinoise potatoes made a decent main in theory although the beef was grey all the way through.  A vegetarian curry and naan bread was also had by my fellow traveller.  On another flight leg, the king prawns with celeriac puree, papaya, courgette and basil oil was a good enough starter, a mini burger was opted for instead as a snack which was on the freedom menu (cheddar cheese, smoked chilli maple bacon, pickled horseradish and ketchup).  One chosen main consisted of mushroom tortellini with black truffle, porcini mushroom cream sauce and vegetable garnish.  The other main was wok-fried chicken, black bean sauce, jasmine and black rice, asparagus and black mushroom.  Both were decent and pleasant to enjoy.

Desserts included passion fruit and vanilla praline and chocolate cheesecake.  Cheeses were presented with pear slices, walnut and balsamic and hand made chocolate truffles from Stephen and Sun Trigg were very well chosen and pleasant to have onboard (beautifully smooth centres).

All in all, these were decent offerings onboard an airplane and was a step up in comparison to the lounge experience which was frankly disappointing and in need of advisory help.

On board in First Class – meal prior to being cooked