This is my second visit to The Clove Club and was a special occasion in that there were new dishes being presented via a wine pairing event hosted by the ever reassuring Tom Harrow (aka Wine Chap).  The two Italian wines that were the centre piece for the event were the San Leonardo and Valdicava starting with those of 2015 and then enjoying the other variants with each course of 2013, 2010, 2009, 2005 and 2003.  I will come back to these.

The food itself on this menu had some old favourites (particularly in the snacks) which were welcome and also with new additions.  All the dishes carried the same style from my first visit in being very similar to those served at The Sportsman where the ingredients do the most talking and most simmered at highly pleasant.  There is a simplicity of design that I love here and the absolute power moments of this meal for me were the unbelievably good ham and the chicken ragout.

On the ham first, this was sliced in to pieces that had as much fat as meat but because they were so thinly and finely done this was not an overload of fat but wondrous combination.  However, the chicken ragout dish frankly put my happiness on a different plain as the tender chicken, sheer chicken essence of the skin also being perfectly crispy without being drenched in fat, the lovely pheasant egg (which I have never had before) as well as the frankly glorious smoked liver sauce was a total triumph and put me in the same zone of being on holiday in childhood.

The wonderful commenatry inserts provided by Tom Harrow were a sheer pleasure to listen to and great to follow stories behind the specially selected wines through the past years.  I have to plead guilty in that I was stacking quite a bit and the more the intake through the afternoon, the more I think my powers of wine tasting judgement suffered.  However, what I have certainty in, is that when I put the San Leonardo 2015 to the nose for the first time, I honestly don’t care that it was only 1 year old, this one opened up nostril receptors that I did not know were there – it was one the most luxuriously smooth and wonderful wine I have ever smelled and tasted.

All in all a rather spiffing afternoon(!) and the combination of superb wines and simple, wonderful dishes (some of which making my heart sing) made for a wonderful lunch, all served via exquisitely warm and professional service from the team led by Daniel Willis and Johnny Smith.  It was obviously not the cheapest of lunches at £200, but for the outstanding quality of what it was, I would frankly pay that in a heart beat and it was a joy to be a part of. 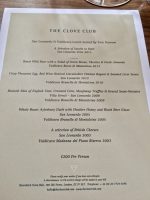 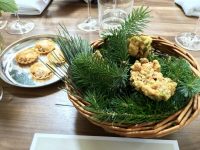 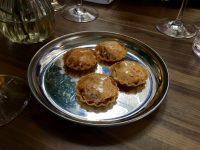 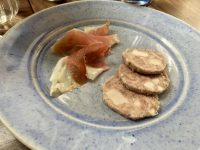 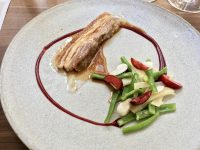 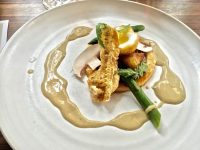 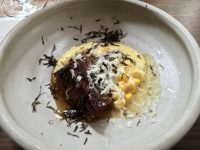 Veal with creamed corn and truffle 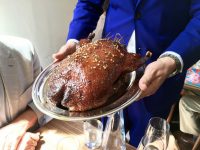 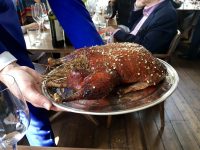 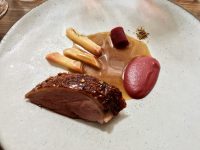 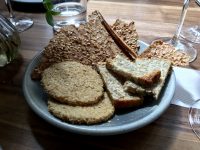 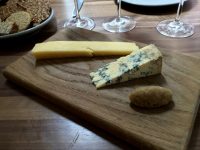 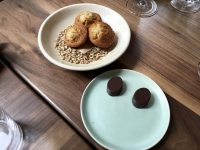 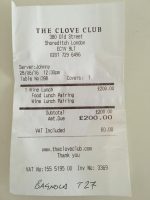 This was a very pleasant set menu to experience and had completely fresh eyes on this restaurant having never been here or heard of it before.  There is a pleasant bar section prior to the entering the restaurant, which, did have a somewhat café feel about it in terms of design which was a surprise – nothing particularly wrong with this and it heightened a relaxed atmosphere, perfect for lunch; diners wishing a more aesthetic interior for dinner should simply manage their expectations in this regard.  That is all surface impression however.  The food was something else and quite brilliant.

Canapés were followed by a frankly wonderful amuse bouche of reduced chicken crispy feet (texture of light crisps) with a tarragon emulsion dip and chicken with buttermilk  breadcrumbs and pine salt served on pine – this was fantastic.  The fish and clementine really worked well together and the starter of black pudding with apple was tingly and sumptuous at the same time.  The pollack and orange butter was magnificent and in its simple use of flavours was of a very similar style to that of the Sportsman in Sealsalter and that is significant to say the least.  Dessert of rhubarb and yoghurt was light and rich at the same time somehow and the only aspect I didn’t immediately take a shine to was the malt cake at the end as I had already gone from savoury to sweet so didn’t really feel like going back to savoury.  However, the mini bread cake was clearly very well made.

A chat with the head chef at the end was very nice to do and was very good to see him at the helm in his own kitchen (which is also visible and open to all in the restaurant).  All in all this was a superb set menu and excellent value for lunch as the 3 courses worked out as 7 with all th extras for £35 at Michelin level.  A highly recommended lunch venue for anyone. 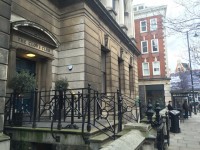 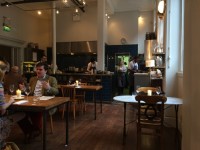 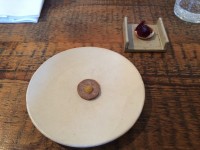 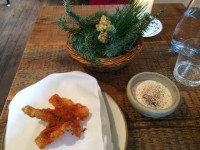 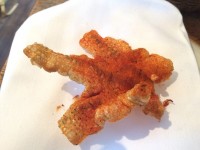 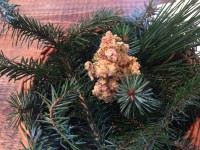 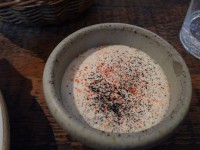 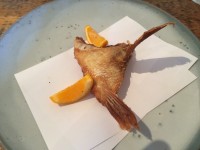 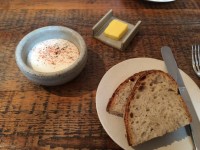 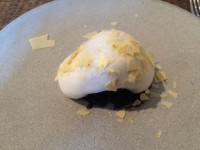 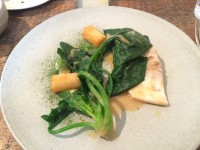 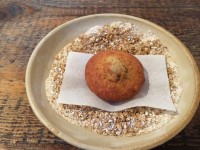 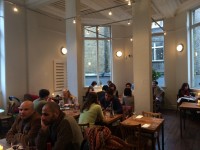 Cafe feel to the dining area.