Almost seven years to the day it is time for a revisit to Club Gascon that has retained its star since my first visit in 2011.  It is still the same chef (Pascal Aussignac), so this was interesting to see if anything had changed or evolved.  In short, the food appeared to have changed slightly for the better and the service for the worse.  It was quite a unique experience for the latter, however I was pleased to see that even though some dishes were overpriced or deceptive from the menu, the general flavour pairing had changed for the better.  This was not my top pick of Michelin starred venues when I compared to the rest of the country however, was pleased the general food content had evolved slightly more from seven years ago. Photos are all courtesy of Andy Hayler.

A cheese and truffle biscuit was produced first to very good effect as a snack whilst perusing the menu and the amuse bouche was elaborately looking but unfortunately not enjoyable.  A white bean puree with pork crackling (boosted by the latter) did not seem to make much impact and the crispy beans pork tomato moss hardly had any flavour thus falling victim to style.

Pine smoked and creamy lobster butters were original to have but I’m unconvinced that these elaborate butters are actually better than excellent salted butter from Brittany, Normandy or Jersey. A black pudding with milk foam and lobster was a pleasing enough but unmemorable dish.

Cep ‘pie’ as was advertised on the menu did not appear to have any pastry much to the surprise and understandable annoyance of my dining partner as it was specifically ordered because it was a pie that he was in the mood for.  I gather the trompette mushrooms, girolle cannelloni watercress & tarragon and Black olive sauce were satisfying in quality though.  My veal sweetbread with tapioca crispy parsnip & kale langoustine bisque & red wine sauce was pleasurable whilst not at the peak of sweetbreads I have had at say, on my earlier visits to Midsummer House.

My turbot, dish was interesting.  It came with dill emulsion of turbot tail sauce, rhubarb pieces and gel chickpea cubes.  Whilst this was a reasonably pleasant combination, the question was asked as to the size of the turbot bearing in mind this main course was priced at £36.50.  It was reported back as a medium-sized turbot, but the weight not specified.  The question was asked again for the specific weight which was confirmed as 1.5kg which is at the small end as turbot can go up to as high as 9kg and having discussed at length with an authority on this subject, the more mature and heavier the turbot, the greater the flavour (as with tuna) hence the price for these fish being very expensive for restaurants and hence the price being expensive for the customer.

Therefore, this was a small portion, advertised as being from a weightier specimen when it was not and when this was confirmed, it was then sold in the discussion as expensive owing to the other elements of the dish such as mace.  Above the overpricing here, I wasn’t altogether happy with the integrity of the representative who was either hiding information willingly or did not know the finer details and was on automatic defence, saying anything to justify the dish when unsure.  The dish itself was ok, but at this price was ludicrous and a letdown moment of the meal.

My dining partner had souffle and had to ask what the black disc on top was which turned out to charcoal and an odd pairing but I profiteered on the pudding in comparison with a very pretty apple and frosted shiso dessert which came with violet and liquorice.  This was lovely to have and a huge uplift from the previous chocolate and foie gras had the previous time (now changed to chocolate and truffle which I am equally happy to avoid) and lifted the meal.

Then a final episode was not the best – I went to put money in the car meter for parking and before I left I asked my dining partner if he could grab me a coffee along with his.  I must have been at least 8-10 minutes on account of the painful phone system to go through to pay if you don’t have enough signal to do via an app and the machine does not take card. On getting back coffees had not arrived and my dining partner reported that he had been actively ignored.  A few more minutes transpired where the staff were seemingly nowhere to be seen and in the end a phone call was made from our table to the restaurant we were in just to get attention; the bit that actually got me was the fact that the waitress actually wanted to continue taking the order over the phone as opposed to immediately coming to the table.

At the end of the £98 per head meal she rather foolishly asked how the meal was, probably not expecting honesty and relying on normal Britishness to prevail. Wrong table to ask I’m afraid, as all the above points above were politley, but in no mistaken terms given to be greeted with more defensive answers.  Therefore, I’m glad I revisited Club Gascon as a) it showed it had evolved a little and was actually better than last time; b) what to look out for and how some restaurant bamboozling occurs and c) that the service and overall pricing were so bad for the return that I have no reason to go back anytime soon and can safely cross this one off the list.

At the time of going to Club Gascon the dishes served were innovative and creative in design.  The restaurant is perfectly pleasant but I would  favour elsewhere for special occasions as it seemed as thought its main forté was for a business lunch environment.  I enjoyed the chocolate crisp at the end but the foie gras and chocolate dessert was just a little too experimental and a bridge too far for me to actually find the combination pleasant.  In fact, this seemed quite the opposite and I was genuinely confused by this match for a dessert.  Crafted cooking nonetheless. 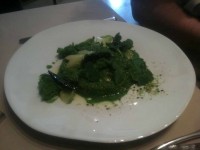 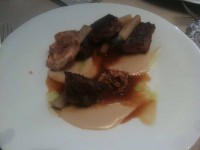 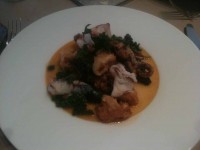 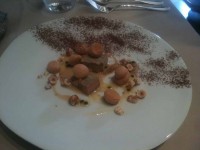 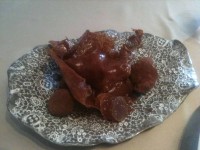 Some flavours were a bridge too far.
Woeful service.