What a treat for the mouth.  Now finally done, I can confirm that Simon Rogan’s Fera at Claridge’s, which, replaces Gordon Ramsay’s hold on the main dining room after 10 years, comes with a refurbished facelift, is a stylish and unpretentious establishment serving very well designed dishes that frankly, would not be out of place at any 2 Michelin starred venue.  An intricate and highly impressive lunch that showed exceptionally good value for money for the quality of the food.

I’ll come on to the food in more detail shortly, but there were a couple of aspects that I was surprised (in a negative way) about this visit, having actually never atually been in Claridge’s after all this time.  Claridge’s is practically a national institution and very popular with affluent tourists who wish to be immersed in the label however, on entering I was immediately approached by one of three bouncer-esque security men who were hovering in the open foyer with ear pieces.  Surely, I thought, it can’t be kicking off here every weekend(?), but the fact that the hotel feels it necessary to have such a presence of guards in their foyer would suggest that they may very well have quite a few unsavoury people to deal with – either way I was immediately hit by the lack of charm in that way, in spite of the oppulant interior.  It felt a little like I had to explain myself on entering as my path was blocked before I could proceed so I asked for the bar and was reluctantly escorted to the obscurely hidden entrance to the side bar underneath the staircase.  Oh dear, not a very welcoming start.

After being served by a pleasant bar lady who took a note of our table reservation (for our drinks to be placed on the same bill), another unfortunate episode occured: the bar man who delivered the drinks felt the need to check my name twice for where the bill was to go to in an expressionless and almost suspicious manner.  The bar itself was quite small and that, with the fact that the ‘Flapper’ (signature Claridge’s champagne cocktail with cremé de cassis and strawberries) was nice but not worth the £18 and the snooty (almost surly) attitude of our barman instantly dropped the experience down notches.

Perhaps they are simply now used to almost anyone coming in off the street and behaving innapropriately – who knows.  All that it did do, was show me not to bother returning to the bar again and probably be more direct with their staff from the outset and be taken straight to Fera – a shame to need to be prepared for this and something you may wish to be prepared for too.

However, once inside Fera it was a totally different experience.  We were greeted by very happy and polite front of house staff and the new design had the customary nod to the rolling countryside of Cumbria (vegetation and country décor).  The lack of white tables cloths and stylish simplicity was very nice visually, extending to a giant wall decoration of endless blades of grass which, initially looked pretty bare, but once informed on closer look that an artist was flown in from New York to hand paint the entire wall, one can understand why they would probably not want to cover this up with paintings.  There had also been changes to the door ways and entrance points and the private dining room will shortly have a back-room access for the kitchen so that it is completely sealed off with sliding doors if necessary.

So, on with the show: canapés were a blue cheese cream on wafer thin crisps with elderflower gel blobs that had a subtle and refreshing flavour – they practically disintegrated in the mouth and were a lovely start.  Next came rabbit within onion flakes that were deep fried and just divine – extremely good.  Just when I thought the pre-nibbles were over, we were then given seaweed crisps with mackerel and then our amuse bouche of warm cheese emulsion with caramalised onion bits which was another lovely warm up addition – almost like a long period of stretching before the main work out! What a wonderful treat to have and especially on a set menu.

The rye bread was fluffy and totally fresh, served warm with a very smooth home-made butter and this was almost a course in itself, such was the care and attention given to it.  The set menu was explored on this visit and the starters of salmon as one and artichoke as the other were both highly fresh and pure in their delivery.  The salmon won hands down but purely to see the different styles, I elected to do every opposing dish to my guest.  The mains of pork belly and cod were extremely well done – both meat and fish were succulant and impressive in design with interesting textures provided by the supporting vegetables.  There was clear skill shown in these simple dishes and as set menus can vary on the quality of the food (hense being cheaper on the set menu), I was most impressed with the overall result and quality of meats that went in to this set menu; portion sizes were, understandably slimmer than the average size as a result though.

A pre-dessert of chocloate nitro-flakes was served and apart from being quite fun (exhaling nitro vapours as a result of chewing this pre-dessert), it was very refreshing – at that temperature it couldn’t not be! Our desserts of passion fruit sponge and sorbet on one side and peanut ice cream and chocolate on the other were also very good return on investment in skill and flavour.  The meal was wrapped up nicely by just the right amount of petits fours served on a small drum of a tree trunk and it concluded a highly satsifying food experience.  A quick tour of the restaurant afterwards revealed the lengths that had gone in to the redesign of not only the restaurant but also the kitchen which has been ‘lowered’ (ceiling brought down) to accommodate more room to grow plants and vegetation above used in the cooking.  Crates of flowers and plants were also sourced in on a weekly basis having been picked in the Lakes up north and foraged in the nearby surroundings of Simon Rogan’s base in Cartmel as well as various Southern English farms being carefully selected for his ingredients.

Overall, this was an impressive meal that was not only highly skilled and visually pleasing, but also had genuinely delicate flavours and remarkable value for money on the set menu (£30 pp before drinks), all encompassing extremely fresh and well-sourced ingredients.  I would recommend going here before it possibly gains a second star which I think it has all the hallmarks of doing, causing the reservations going from the current 3 month wait to much longer.  Feet firmly established in London now I would say and well done Mr Rogan! 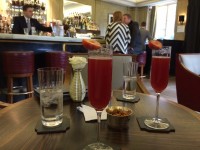 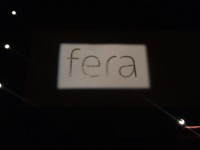 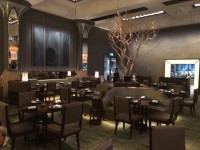 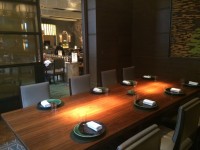 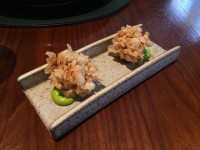 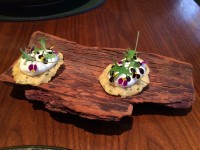 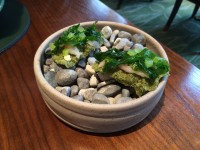 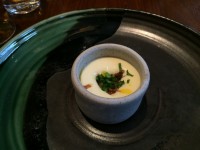 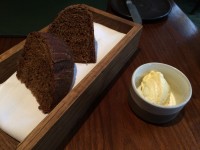 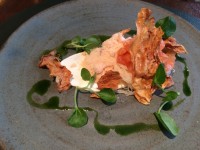 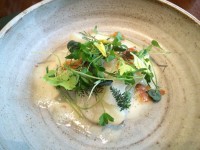 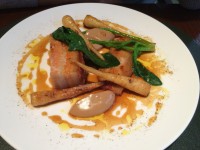 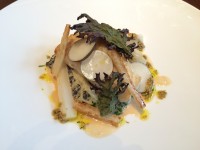 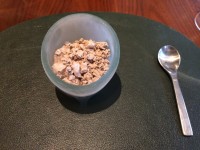 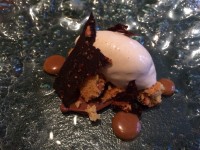 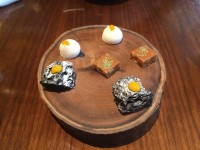