Gymkhana had a setback last year after a fire caused it to close from mid-2019 to February 2020.  This has given the restaurant the opportunity to give an entire makeover.  The result is a much more swish and Mayfair style of decor than the previous dark wooden and colonial feel that it had and was a part of its original charm and arguably USP.  The menu appears to be much the same but now led by Jitin Joshi (originally from Dehli).  The (approx) £90 for lunch with one beer was steep but there was no need for us to order as much as we did so you can go for much less.  Dishes were on the whole good but not quite at the same level that I had on my earlier visit six years prior and Gymkhana now joins the melee of Mayfair restaurants to choose from with nothing particularly standing out as special in comparison.

On the plus side, menu choices here are vast.  They range from good vegetarian and vegan options, lunch menus of 2 courses for £27.50, 3 courses for £32.50, other menus of 4 courses for £40, 5 courses for £45, the premier 6-course tasting menu at £90, a bar snack menu with snacks ranging from £5-13 and an a la carte giving curry choices anywhere between £18 for standard curry to more specific main choices of £38 for the expensive lamb masala main dish for example.  Therefore, if you are cautious and unfussy, you can leave here very full for approx £30 all in or, easily spend well over this for just one dish depending on your mood and preferences.  It’s all, in the wrist…!

Mixed popadoms were first naturally and came with a shrimp sorpotel, house pickle and lime pickles with the sorpotel being my favourite and least acidic among the three.  Next was a mix of flour and potato-based pav (small bread bun) which goat kheema (minced goat with spices and dried onion on top) is used to fill.  This was pleasing to see such an authentic and everyday classic from Mumbai which is now a staple of Indian street food, using one’s fingers in this Mayfair restaurant.

Chicken tikka was extremely good and in hindsight the best part of the whole lunch.  The large and succulent pieces of chicken were seasoned with dried fenugreek and for a decent finishing spiced flavour and the chicken itself a delight, cooked in a charcoal tandoor as opposed to a gas-operated one.  This was very interesting to hear from the head chef as charcoal tandoors are very difficult to cook bread in owing to the these traditionally being made out of clay or brick and very difficult to lower and raise the temperature (in comparison to gas-operated metal tandoors) giving less control for making bread and easily burnt on the outside without being cooked on the inside etc.  On the side was a refreshing blend of beans, cucumber and tomato salad.

Chettinad duck was served under a dosa (a cone made out of lentil and wheat flours).  Personally, this was actually not my favourite dish mainly for the flavour of the turmeric and mixed spices involved that were just altogether too earthy and the duck itself felt like it had fine strands of gristle throughout in texture, so not my favourite here. Butter chicken however, was beautifully done and the mixed naans, a pleasure to dip in this main.  Frankly, you could be pretty much full with just this dish and a naan and that is £27.50 well spent for the day.

Biryani was served underneath a pastry lid which was a good effort to see and although this used the more delicate muntjac venison (as opposed to the more common lamb) and was pleasant with crispy onions, melon and cumin seeds on top, but overall a little wet and sludge-ish within as is seemingly the point of Biryani to not be.  Black dahl was pleasantly luxurious and rich with its layer of butter on top and the okra fries were extremely crispy with the amount of batter.

What was nice to see was a specific beer crafted at the time of the Raj and called 4th RIFLES (as in the 4th Battalion of the Rifle Regiment) as the head chef’s grandfather served in the Colonial army of the British Empire.  Pretty hefty at £6 per small bottle, but fruity and decent as an option to accompany the savouries.

There was only room enough in the stomachs for one dessert and the one chosen was the signature apple Shahi Tukra which was a layered condensed milk dessert with Bramley apple, chocolate and sweetened milk which was enjoyable and was as sweet as it sounds, but just manageable. Fennel and sesame seed sprinkled chocolates comprised the petit fours.

Service from the whole team was mixed, ranging from concerned managers/owners dedicating their time to the potentially more influential diners and basically ignoring guests opposite key individuals, to the very eloquent and switched on head chef who kindly afforded a few minutes from service to explain cooking approach and general thoughts, to an extremely adept and caring waiter who looked after our table throughout and smiling front of house members providing the hellos and goodbyes.

I think the bottom line with Gymkhana is that it is good for ducking in for any personal favourites.  They have now decided to be a more grand affair by design to blend in more with its Mayfair competitors, have sourced a very competent chef (Jitin Joshi originally worked for the Taj Hotel Group and was pastry chef at Maze when under Jason Atherton and then moved to Dubai prior to being recruited by Gymkhana).  As a place it is pleasant enough with some good Indian food, but I am not enthralled enough to want to spend a fortune here which you could easily do and would sooner recommend coming in for one or two dishes at the bar.

A new addition to the 1 Michelin star family for 2014/15 and I was pleased with the visit.  Set menu lunch was taken downstairs at their bar which came with the added bonus of having an individual waiter for our entire meal who clearly knew his stuff and took great pride in serving us our lunch.  Most other areas have dining booths which is always good to have an element of privacy at your table and the décor hailing back to the British Raj in India felt extremely welcoming. The reasonable prices of the lunch, combined with the fact that there was so much we couldn’t even finish and the fact that there were some lovely, different beers to choose from made it an entirely comfortable and pleasing visit.  The food itself was clearly well thought out and the star of the show was the slow barbequed and spiced Salmon – a definite treat to have.  Would recommend this restaurant to anyone for virtually any occasion. 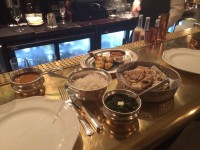 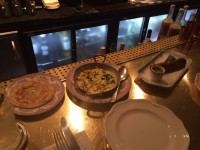 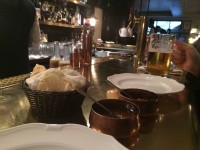 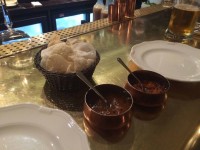 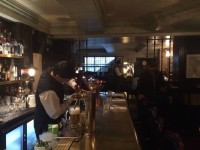 
Dark ambiance.
Acoustics downstairs can be a little heavy.