Japanese and French fusion dining in Osaka at spectacular level

Hajime (named after the owner Hajime Yoneda) is an innovative restaurant that uses a style of French cuisine using Japanese and surrounding territory’s produce.  It has held 3 Michelin stars for three years and the head chef, Mr Yoneda, has been at the helm since 2008.  In short, these were some of the most impressively cooked and well-designed dishes I have had anywhere in the world and I would say this restaurant is definitely worth flying to as a special journey, totally in keeping with is well deserved 3 Michelin stars.  An outstandingly conceived and executed meal.

The ethos of the menu at Hajime follows a set, seasonal pattern.  As it was Autumn, my meal was broken down into the ‘Mori’ (from the forest),  the ‘Seimei’ (life), ‘Kawa’ (from the river), ‘Umi’ (from the sea), ‘Hakai to Douka’ (destruction and assimilation), ‘Kibou’ (hope) consisting of ‘dew’, ‘mother earth’ and ‘wildflower’ components, finishing off with ‘Ai’ (love) displayed in the red colours of the dessert.

Therefore the meal began with something from the forest and this appetiser was a show stopper right up front which essentially ‘soup within soup’.  A perfectly clear consommé of matsutake mushroom held what looked like a button mushroom head at the bottom.  Floral notes came out of the glass on sipping and after sipping this fragrant mushroom ‘tea’, I let the mushroom head plump into the mouth to reveal that this was actually a sphere of creamed mushroom soup, held together with a thin gelatine (perhaps aga-agar although I could not establish this for certain) – this film had just enough strength to hold it together, rather like an egg yolk and on closing the mouth it gently burst open to mix the creamed matsutake with its surrounding consomme.  The glass incidentally was decorated with alone, Autumnal leaf taken from treas that surrounded where the mushrooms had come from.  Very, very clever and genuinely perfect as a mushroom soup opener in powerhouse house simplicity. Rarely do you get such a superb opener of wonder at restaurants like this.

The ‘Seimei’ (life) dish was brown spotted grouper with herring roe, eel and watercress in a very appetising doughnut were follow up snacks to be had before the meal which were very good as was the intensely delicate rice paper with hata (Japanese white fish), black olive shavings and herb oil.  The fish itself was unbelievably sweet and another lovely, new ingredient to try.

Salmon from Naggan (north Japan) was the choice for the dish emanating from the river (Kawa) and came with salmon roe, hatcho miso (100% soya beans and no wheat or grain used creating a lovely richness), tomato and sorrel, miso (green blobs) and including a clever candy in shape of salmon on top.  This was very light and pleasing, although the salmon itself was fairly neutral in flavour surprisingly.  It was mainly exceedingly soft with beautiful decoration that worked quite well together as flavours and an impressive design of all elements of the dish looking like running water and waves.

Freshwater prawn was next, served against a hot stone on the plate with uncured ham, quail’s egg, mantis shrimp and the ‘Umi’ (from the sea) was suppon, an extravagant delicacy of Chinese softshell turtle inside a ravioli with mushroom sauce. Another expertly crafted dish but a little hard to know where to start. The real moments on the dish were the ravioli with suppon which had the strongest sense of umami I think I have ever had and the utter sweetness of the prawn.  Another, new life moment in food.  The dish also came with foie gras, Asian hazel, pumpkin, black pepper and thin layer of candy on top. Lovely biscuit but foie gras could have had a touch more seasoning as was a little too subtle.

A very cleansing interlude of pine sorbet representing the ‘dew’ was served prior to the main event and this was another first – pine in sorbet – and this worked very well I thought.  The main course itself was Taoshita beef, served with offerings from from ‘mother earth’ such as squash, beetroot, parsnip, fresh cheese, olive oil, apricot, chrysanthemum, turnip and fig all on a matcha sauce.  Phhew, quite a few things to note on that one(!).  Homemade bread also came on the side in a break from the norma to help mop up the exquisite sauces and jus, but it was the matcha that was probably most surprising and lovely addition.  I was a little worried about this at the beginning as I suspected this would be a bridge too far, but it really gave a lovely tang to the beef and was a refreshing combination and lovely alternative way to having beef.  Relief and pleasure in one(!).

Nitro cheese was then served in a way that made you breath out nitrogen vapour (as does when having virtually anything ‘cooked’ in liquid nitrogen) and this was served with crisp filo pastry, olive oil, biscuit sabre and chrysanthemum syrup from ‘wildflowers’ as a final and gorgeously sweet component.  This was an utterly outstanding dish of intense cheese flavour complimentary sweetness with cold and crisp for additional sensations.

To finish, a ‘love’ (Ai) dessert of strawberries and raspberries, strawberry ice cream and sablé biscuit had a hot couli poured into the ice cream shell.  This was very well done and not too sweet at the same time however it was the petit fours that I thought took the crown for sweets in an unusual twist.  Among the offerings were candy floss, chestnut cherry, apple tart, popcorn panna cotta, (salted popcorn was genius on top), mascarpone tart, deconstructed chocolate macaron and an incredible apple sphere.  Although I have not had the fabled apple dessert at 2 Michelin starred Bord’Eau in Amsterdam, this was in some ways even more impressive as a miniature replica version (I do not know who designed it first).  This is one of the most impressively done sweets. let alone petit fours collections I have had full stop and this, combined with how light the sugar sphere was and the beautifully prepared apple was almost heart-stopping.

I hope this expands on why this restaurant gets such a high grade from me and anything less than 97% is unbefitting for the quality of this meal. 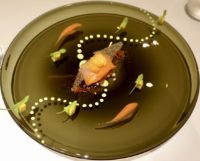