Kai is a long-standing Michelin starred Chinese restaurant in a quiet and alluring part of Mayfair and on this revisit I was able to see the entire ‘works’.  The meal had some lovely dishes no question (one not changed in 7 years), and is the sort of place that is very good for once in a while treats or romantic occasions.  But, the £569 price tag for three adults and a child I thought was verging on insane, even for my exploits and if the fourth diner was an adult, the bill would have been higher still.  The killer as usual was obviously the drinks, with £16 cocktails, £45 for the smallest sake and a medium priced bottle of wine at £80.  But even still, it is a good advert to either calm down on that front in the evenings or come at lunch instead to minimise the booze.  Full details are at the expansion button below as usual, but the overall impression was that it was good to do, but visits will be toned down in future and I am far more inclined to do a blow out at the more reasonably priced, yet also Michelin starred Chinese restaurant A Wong instead, as a reference.

Pre-dinner cocktails were definitely inviting and turned out to be certainly well made, but were essentially over in a couple of slugs, being served in martini glasses and £48 later we were 10 minutes in to the meal.  Never mind, they were quite nice and perhaps it won’t be all like that we thought….

Nibbles arrived in the form roasted Duke of Berkshire pork belly, ‘char-siew’ BBQ glaze, crispy Bao, pickled cucumber which were entirely doable as were the strips of lightly seared beef fillet with soy vinaigrette, shallot oil & chopped coriander, although the latter could have had slightly more kick from the soy for me.  Clearly, the sesame prawn toast had to be done and even though virtually identical to as it was 7 years ago, they were still, as good as they come when it comes to a simple offering (nice and light but with good crunch and toned down oil at the same time).

The ‘pigs in blankets’ consisted of Iberico pork, plum and lime dressing, chopped cashew, sliced shallots, Cos lettuce wraps and these proved good, but simply over in two mouthfuls – another £17 down the tube in under a minute.  Pan-fried foie gras of caramelised cashews, white pepper, spring onions, grapes, passion fruit dressing was very well done – great textures and sweet aspects working nicely together and moreover, the foie gras held itself together as well without being overcooked.  The Tan Jia’s broth was thick, smooth and packed with flavour as a duck & carrot soup with lobster oil, lobster and spinach.  I was also quite pleased with the soft shell crab served with chilli, shallots spiced batter and green mango – this wasn’t the usual drenched in oil affair it can be, so full marks for making the deep fried reminder disappear.

The whole Peking duck was £98 and served in two parts – the first, in the usual way with pancakes and the second as a conventional, stir-fried main.   Part one came with cucumber, spring onion and plum sauce as normal but at Kai they insert an additional element of signature chilli sauce which did give it a slight lift I thought and that was good to have.  It was undeniably good quality duck and perfectly crunchy skin, but was also a little bland on its own when comparing to the spices that are continually painted on to the cherrywood roasted Peking duck at HKK (sadly now closed).  The fried aspect was succulent and fine (nothing special) and the much needed vegetable insert of broccolini was welcome, but frankly almost absurd to be priced at £17.  I can understand sides with expensive ingredients being priced in this realm, but broccolini is simply not expensive, so this is a large negative which adds to the pot of being put off from coming back quickly.

With the exception of the chocolate and peanut parfait dessert which was far to heavy (almost like a lump of dense matter), the durian soufflé was wonderfully original and done (not too pungent) and likewise, the pandan creme brûlée served with Malaysian coffee ice cream, ‘Milo’ powder and tuile was an absolute dream to have.  Actually, one of the best desserts had on record(!), which was surprising as desserts are not really the forte of Asian restaurants in my experience, so a double pleasure.   Petit fours followed a similar formula from years gone and by the end of the meal everyone was more than content with the offerings.

Service throughout was heartfelt but was hindered by only one staff member being able to be properly understood throughout and almost not being allowed to wait at the bar by the front of house while waiting for our taxi afterwards (not good).  I was also quite surprised that the toilets were not very well maintained.  This almost gave the impression that the restaurant was riding a wave of its beautiful location and swanky interior and then forgetting the importance of the little touches.  Not the end of the world, but meant the experience was not as special as it could have been for the charge.

I have few complaints on the food here, bar one or two preferences, but the overriding feeling on leaving was completely and satisfactorily  sated, but just a pity it cost £289 for the privilege which, in my view for the above reasons is simply excessive for the return.  I will come back at some stage I’m sure, but now that the grand experience has been done, it was definitely enjoyed, but probably doesn’t need to be done again for a wee, while.

The evening bill for three adults and one child

Certainly not an experience I regretted but I walked away from Kai feeling good to have seen and done it but with no burning desire to return immediately.  The food was unquestionably nice but it was a shame to see hardly any ‘Western Chinese’ favourites; something that has changed in recent times looking at their online example menus within 2017.  It has held its star since the time of my visit which is all to their credit and is worth a drop in but one cannot help thinking once inside that it is somehow more geared for those that live in the nearby vicinity rather than a food event for everyone.  Things change a lot so another visit will be merited whenever I can do this. 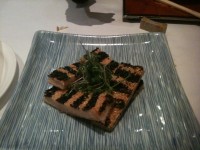 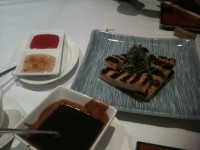 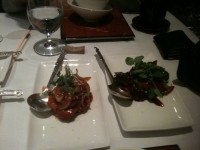 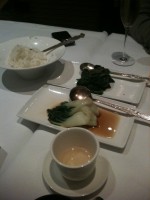 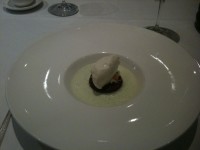 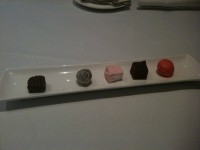 
Too expensive for what it is.
Low atmosphere.