Specialist tempura restaurant in the heart of Ginza

Kondo is a fine tempura restaurant on the 9th floor of an office building in Ginza, Tokyo.  It was awarded 2 Michelin stars in 2009 and was a delight to be in the hands the head chef who has been there since the beginning. Fumio Kondo is the head chef who cooked in front of all diners on the opening counter of the restaurant as one walks in (which holds ten seats) and his son Masahiko Kondo cooks at the second counter further inside the restaurant (also fitting 10 diners). The tempura dishes here were quality, no question and the lunch menu was split in to two choices: 12 courses for 6,500 JPY (£45) or approx 16 courses for 8,500 JPY (£60).  This is very good value in the grand scheme of things, especially for the location and accolade.  Highly recommended and details of the meal are at the expansion button below.

All vegetables and fish came from the Tsujiki market that morning and I established all items were fried in sesame oil.  The tempura batter itself is remarkably simple being purely egg white, flour and water, although the type of flour was withheld as their secret.  Salt served was from Yamaguchi (a prefecture in southern Japan).

The meal started with prawns were utterly light and richness kicked in a few seconds after chewing.  Asparagus was only lightly coated and dipped in tempura sauce mixed with Japanese radish, which made for a very decent flavour.  Kisu white fish was totally immaculate in every way.

Japanese sprout that was lovely in every way.  A flower should have been heavy but this was not and clearly good produce.  A traditional lotus root has a customarily hard texture and slightly bland as a flavour, but it was very nice to drench this in tempura sauce and use that to the full as it was the batter that was the star and the items chosen like the lotus almost felt like worthy vehicles or excuses for showcasing the tempura.

Squid was just texturally superb and lovely with just lemon and salt. Tamaneki onion is produced all year round which you might think is not good, but this was gentle in onion flavour and delightful in every way.  Sea eel (Anago) was my favourite fish flavour but laced with salt and lemon and tempura sauce was beautifully soft and succulent as you can imagine.  Tempura prawns with tendon sauce and miso sauce had a really strong prawn flavour utterly complemented by the rice.

You might think that having strawberries as a dessert is not very special however, I can confirm that when they are this wonderful, it is worth it on every level.  A later trip to the Tsukiji market at 6am having white strawberries opened the eyes to even more spectacular strawberries but also confirming why just having fruits in Japan is a magnificent experience.

All in all this was much-valued lunch, expertly executed and for a reasonable price.  If you like tempura, then going for lunch here would be a very good move on your part to try in Tokyo / Japan. 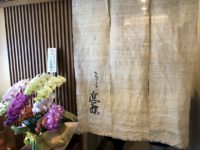