Opened in early 17, Anne-Sophie Pic has ventured from her 3 Michelin starred restaurant of Maison Pic to lead the main kitchen at the newly opened Four Seasons hotel in Trinity Gardens (just opposite The Tower of London).  A grand hotel indeed (formerly an old governmental accounting building) with a very impressive rotunda for drinks and casual bites, the main restaurant has been modernised in design as far as the legacy pillars and infrastructure will allow.  The cooking here was immediately at 1 Michelin star level as my opening impression with potential to be a 2 Michelin star contender in the future after it has had time to settle in, but my meal showed some basic errors which were easily avoidable.  I would suggest doing a double-take look at the prices of the cocktails and drinks in the rotunda before making any assumed orders.  A slightly corporate feel to the place in general, that won’t matter if you are after good food which, is something you are going to get here and I will be keeping an eye on this one in the future.

I say it’s worth keeping an eye on the drinks here as we opted to go for a kir royale and bucksfizz at the bar and simply put that on the table; we were a little surprised to see the glasses of the house champagne being £17.50 per glass and a shot (teaspoon) of the creme de cassis being £8 in addition.  On entering the restaurant it was obvious the efforts to make guests as comfortable as possible in the confines of the legacy space provided by the listed building.

The artichoke leaves were exceedingly light and a lovely touch, reminding me of the ones had at Geranium but as these were so dissolvably light, I would have thought more of them would have been better or simply make slightly thicker to give more return.  The comsome tea was very welcome and the breads showed a good mix with interesting coffee butter but the latter was hard and this was a basic error as simply makes spreading a nightmare – so easily avoided. The cauliflower cheese foam was utterly delightful as the main amuse bouche; completely light with strong cheese notes and touch of heat from the chilli – a lovely start.

The Pasta parcels filled with Brillat Savarin cheese, seasonal wild mushrooms, tonka bean and Voatsiperifery pepper was a very good dish.  The pyramid pasta parcels were cleverly and nicely done and the mushroom itself at the base being pronouncedwell enough at the same time.  I opted for the white asparagus that were given in small portion sizes with a very nice curried hollondaise that was mousse-like and therefore lighter than the norm.  I asked for extra and still didn’t think it turned out to be enough so if you are a sauce / hollondaise lover I would manage your expecations here accordingly.

Both the monkfish and the pumpkin sauce to go with were very fresh and I thought the green tea emulsion to go with the Mackerel was marvellous.  This was a pretty hefty portion as an a la carte main as it came with a potato salad with mackerel as well but then again, at £32 for the main alone I think this was reasonable in portion size.  The chicken main was gorgeously soft with the skin done well in its supporting role and the Dexter beef very tender, just a little lacking in punch though for me.

The desserts were very good and the signature Millefueille standing out – although you can’t see from the photo, inside were layers of fine pastry with jasmine jelly are concealled within the cube of royal icing of eggwhite and sugar.  This was clever in design, light with lemon and citric notes coming through from the sweet pepper foam at the same time.  Green tea seems to be a very important part of Anne-Sophie’s preferences and I was glad to taste this in a softened way within the ice cream and not a lump of bitter ice as I have had in the past.  Petit fours including a mini cheese cake and marshmallow infused with chartruse were a fair finish.

So all in all, a well done collection of dishes but with some points that were noticeable at the same time.  Ultra picky points include napkins not being refolded when away from the table (not the end of the world as an experience I assure(!), but when you see this as standard in higher echelon restaurants it is very noticeable when not done), the butter was hard, there was a longer than normal wait for the food menus (especially as there were only a few tables on this Saturday afternoon taken) and we were overcharged roughly £70.  Stupidly I didn’t check the bill at the end of the meal and only noticed this afterwards, but the management were very good about it and addressed all on the Monday morning refunding where necessary.

A grand building, fine interior with some finely crafted dishes that were indeed pleasant and clearly has some more to offer.  I would not be suprised in the slightest if this picks up a Michelin star in the 2018 guide later this year (Nov 17) and am sure time will bring more stability to the overall show in due course.

Potato salad with mackerel side

Dexter beef, roasted in coffee and cinnamon leaves, celeriac in brown butter with gin and sobacha

The white for the table 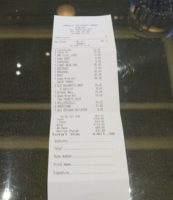 The lunch bill for 3

Premium on bar prices.
Some basic errors that had to be dealt with.