Brasserie looking, but fine dining neighbourhood restaurant in Chiswick perfect for romantic occasions and those that wish good flavours of food

A long overdue revisit to this pleasing suburban Michelin starred venue.  The lunch menu showed good value as this turned out to be £35 for three courses and with the home made sour dough, canapés and the satisfaction that the food was, this was overall a pleasant package.   Whilst the dishes themselves were not overly elaborate, it was a comforting collection with some good moments and a couple of parts that could have been tightened.  Definitely good to get back after quite a long absence and especially in the company of none other than Andy Hayler as the ultimate icing to the occasion.

Snacks arrived at the table in the form of seaweed crisp crackers with nasturtium leaves, taramasalata and dried bottarga (form of roe from grey mullet).  The crisps themselves were quite plain but thankfully the toppings made up for this as was clearly their purpose.  The starter of suckling pig agnolotti, sweetcorn, kohlrabi, pancetta and roasting juices was very good – a deep sense of the pig encased in little parcels of soft agnolotti with a bit of crunch from the kohlrabi and sweetcorn made a very pleasant starter with a supportingly rich sauce.

It was actually the creamed mash that made me opt for the chicken as I am continuing my search for a creamed mash that can rival that of Mr Robuchon’s.  The chicken was gratifying and came close to peak level from the thigh and skin pieces at times.  The herbed stuffing between the two was great to see but needed something perhaps to lift it.  I particularly enjoyed the light and crunchy nature of the Italian yellow beans (that appear light green), similar to that of salty fingers, packed with moisture, but the presence of a hair in the dish was an unfortunate presentation for a venue of this standard.  I had a brief taste of the roasted and braised Berkshire deer with its black lentils, turnips, beetroot and blackberries which had a  fulsome flavour with perhaps an even deeper and more powerful jus to accompany.

I should mention that the half bottle of German Riesling (Mosel) was a very pleasant choice as Riesling is not usually my pick of the bunch (I can find too aggressive), but this variant was refreshingly sweet and light at the same time (10% alcohol) which was just what was needed.  This also went quite well with the moscovado custard tart which was beautifully eggy, wobbly and rich with well portioned crème fraîche and sweet, roasted cherries – a very good combination for the senses.  In contrast, I found the strawberry soufflé far too sweet and the salted caramel petit fours a touch too salty.

Overall this was a pleasing 3 course lunch with various additives, representing good value for the food alone.  I was actually expecting the same a la carte prices for the food as my first visit but was delighted after ordering to see that the set lunch menu was actually far more competitive to its 1 Michelin starred family and therefore have nothing but pleasure in putting this in the value for money category.  Service was conscientious throughout and whilst my first visit had more memorable food moments and there were actually a couple of misses on this occasion (hence the lowered score), this is still a notable neighbourhood restaurant which was good to see again.

The half bottle of white 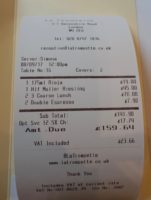 The lunch bill for 2 with wine

This is another 1 Michelin starred option in SW London along with Hedone, also in Chiswick and The Glasshouse in Kew.  The parfait starter had here at La Trompette I would rate as one of the nicest I have had and the cooking was certainly fresh and of a very high quality.  I felt it was punching a little above its weight for the prices of the menu (over £50 per person for just an a la carte option at lunch), however there is still a good experience to be had here in terms of food and is a pleasant place to have a more upbeat meal on a Fri or Sat evening.  I can’t however place this in the value for money category compared to other set menus as its only real downside, however the taste buds were very pleased from this visit – thoroughly recommended. 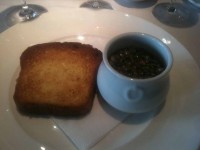 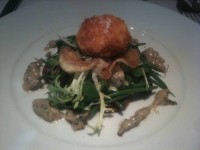 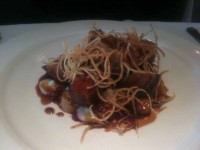 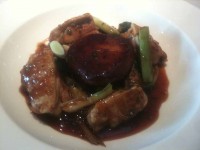 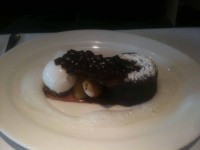 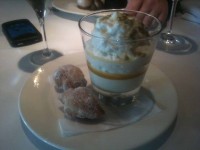 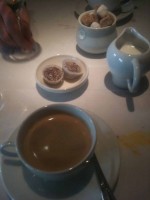