The setting here was as familiar as any other L’Atelier with its distinct black and red interior with counter dining all around the kitchen.  I was curious about this particular Joel Robuchon as the menu was extremely similar to the menu at the 1 Michelin L’Atelier in London, the 2 Michelin L’Ateliers in Paris and the 1 Michelin L’Atelier in Las Vegas – yet this one in Hong Kong has 3 stars.  This was a notch upwards from the other L’Atleiers that I have visited, showing some good aspects (including an oddly, very reasonable wine menu) but ultimately not a vast difference to the others at 1 and 2 starred level and was a pleasant experience when you eventually find it through the maze of shopping mall walkways and disjointed escalators that you will need to navigate through first.

The bottom line is that it was quite difficult to see the exact difference.  The bits I did notice however,  were that the bread selection was far superior at this establishment (aspects such as the mini croissants were utterly divine) and serious attention had gone in to the making of these.  The other aspect I noticed came with the foie gras mini burgers, which had thin cut fries (as opposed to the crinkle cut chips found in London branch) as well as being served with a ginger ketchup which was beautifully viscous and tasty.  Other than that I couldn’t detect too many other differences other than white truffle which I have not seen  on the menu at L’Atelier London and the service was immaculate here in Hong Kong as opposed to just good, which I have experienced at the other L’Ateliers.  What I was very surprised to see was a bottle of my favourite champagne (Ruinart Blanc de Blanc) available for £70 which was shared and was very good value to have at a restaurant.

All in all this was a wonderful Sunday evening bite to eat which, in casual clothing, to that standard at that time of the week, you would have to search very far to rival. 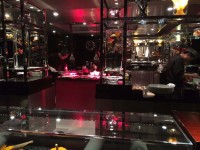 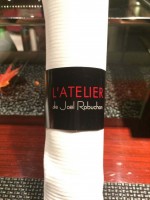 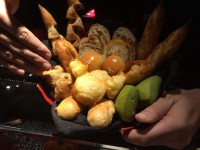 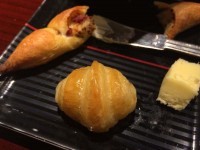 Bacon bread and mini croissants amongst others 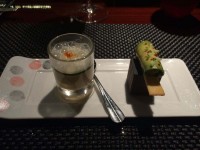 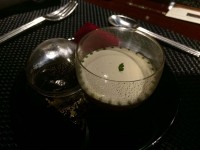 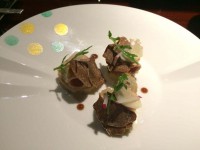 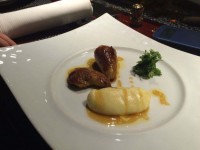 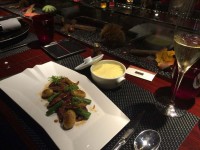 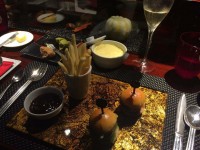 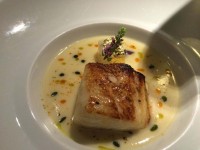