World class cooking in an unassuming restaurant, located in a plain looking neighbourhood serving some of the best food had on record.

Some might say travelling north for 3 hours on a train from Rome to Padua (20 minutes outside Venice) just for a meal is excessive but it is very easily dealt with when accompanied by fine company, fizz and films on a laptop.  Moreover, when the food is as good as it was on this occasion it is the very least of my concerns. Le Calandre is run by the charming Massimiliano Alajmo who is now the youngest chef to ever gain 3 Michelin stars. His family owned restaurant has an unusual design, located on the side of a dual carriageway, in a neighbourhood that resembles parts of Old Kent Road, a huge sign advertising the restaurant name and a plastic pink dog by the entrance.  However, once inside the very dim lit interior, one gains the impression of being inside a temple of gastronomy rather than anything else.  An amazing meal in general that showed wonderful attention to detail and care for the diners’ experience.

There are various tasting menus to opt for and of the choices, the ‘Classico’ was done based on the fact that if you’re going to do genuine Italian dishes, why not see how these classic dishes are done at superlative 3 Michelin starred level? This proved to be a wise choice.  The absolute power of the ingredients used meant that every dish here was an event.  The nibbles inspired from south, central and northern Italian dishes were all light and wonderful with the tomato puree canapé bursting with flavour.  The langoustine, having been caught that morning and prepared just before we arrived, was utterly sweet and packed with flavour accompanied by a wonderful cocktail sauce made from lobster.  Next was a cuttlefish cappuccino soup, which was a heavenly and although it felt like it had in excess of 1000 calories, was equally wonderful.  I really enjoyed the hot green, turnip soup after this with its cold, onion sorbet, which obviously counter balanced superbly – clever and superb.

Then came one of the nicest touches I have ever seen – the head waiter noticed that we had cleaned the plates of crushed and warmed tomato (served with a glorious ricotta cream ‘cigar’ in amazingly light pastry) as well as a dishwasher could.  As a result of noticing this, the actual pan the tomato was made in was brought the table so that we could mop all the remainder up with pieces of freshly made bread, decorated with drops of refined olive oil.  Only a place operating at that level of confidence and security would be happy to do this and actually ‘get it’ as to how much this means to people who love this. Just as a child loves to do this whenever their Mother made their favourite sauce (which I obviously always did) this was a present from the restaurant for an equally excited adult and something I have never seen before.  The staff wanted to do this for us and I can’t say how much this raised the happiness valves.  The same was done with the risotto, which had an introductory pot of how it was when it was first rolled out at the restaurant and then the following was the upgrade with its broth.  Both had the delicate glaze of liquorice which was just at the right level and they were both simply excellent – if pressed, I would go for the original based on its greater ‘gooyness’ which the broth version obviously takes away but I loved that as well in terms of the lighter texture as well.

Next came the meats with the beef tartar with truffle was as cold and fresh as you can imagine and then a dissected thigh bone of a cow which was grilled to produce frankly the best marrow I have ever had in my life. Bone marrow I have always found almost too powerful but this was actually softened and boosted with sweet herbs producing an incredible flavour. I will never forget this dish.  The pork was so succulent with a perfectly crispy and juicy skin on top with lovely mustard foam and sauce.  The only aspect I was luke warm on for this meal was the soured vegetables that accompanied as these were great for texture but a few too many flavour and could only do them with all other elements.  The other element I thought I was a fraction strong was the pre-dessert with sherbet.

The mozzarella egg dessert however was a life time memory dish.  This was simply amazing and without a shadow of doubt a clear 3 star dish by a country mile.  The milk sugar shell was lovely and when cracked exposed glorious sweet milk foam inside all on a bed of mozzarella cream with glaze of oil – utterly divine stuff.  The meal was finished off with an atomised brandy and ‘white’ tea, which is made from purely the tips of blades of grass, that are white and reassuringly very difficult to come by for the area of Italy that it comes from.  Clearly this had to be done and was refreshing and slightly sour at the same time.  My bill finally came to €300 all in – having already set this aside prior to the trip, it didn’t even register paying this for one of the best meals had.

This was an outstanding meal, which was simply rammed with wonderful and powerful flavours from raw and classic Italian ingredients.  There were multiple wonder moments and the number of these was one of the highest on record for a tasting menu and it was superb to meet the executive chef himself who is clearly operating on the highest levels one can – a privilege to meet and chat with him around his kitchen and fantastic to experience his work. 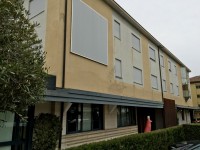 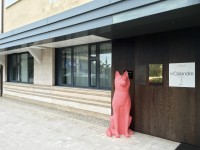 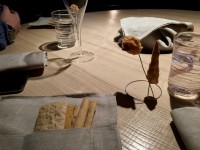 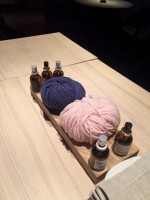 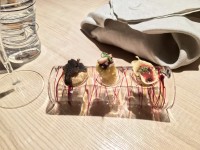 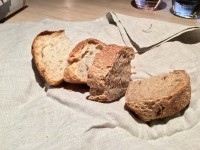 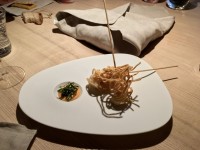 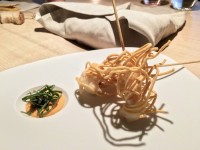 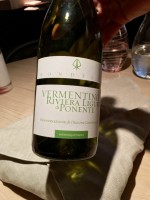 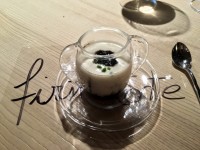 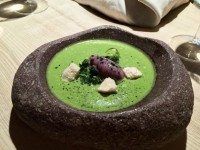 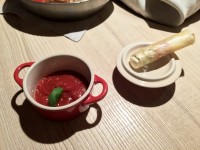 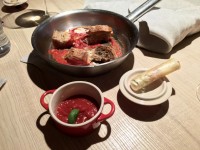 Cooking pan given for the remaining tomato 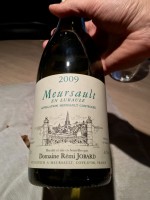 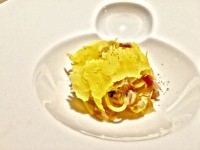 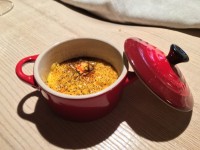 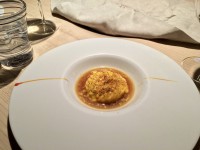 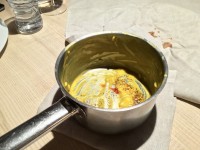 Risotto pan given to the table 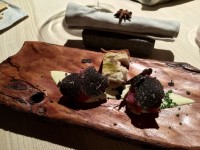 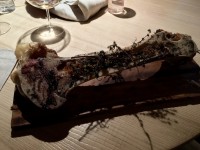 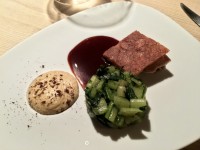 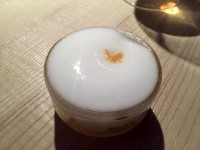 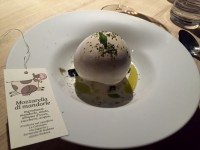 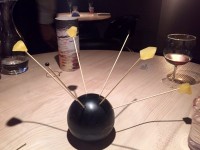 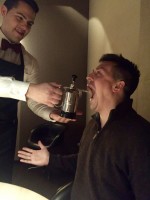 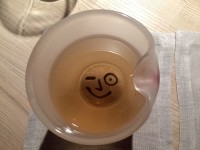 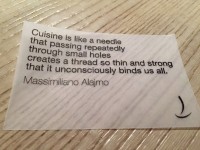