Le Gavroche has been a staple in London since its inception from the Roux family.  The first restaurant in the UK to gain 3 Michelin stars (1982) and has retained its two-star rating ever since Michel Roux Jr took over from his father (Albert) in 1985.  It is as charming now as it has been since relocating to its Mayfair location and is still, in my opinion, one of the loveliest restaurants and arguably best classically French restaurant in the whole country.  French wines are at a huge premium to be aware of and it is not a frugal experience, but its unique and special feel allows you to accept this easily for any notable occasion.  The menu on this occasion appeared to be slightly less impressive than from just under ten years prior, but the whole experience still the same wonderful Gavroche.

As our meal was in the festive period, it was actually the first time I had seen the basement restaurant lit up more owing to the Christmas decorations.  Another miscellaneous observation is how much I still love the fact that the host is asked for in the bar or at the table and only he/she is handed the menu with the prices whilst all the remaining guests are handed menus without prices (probably a good thing for both parties if you are new to fine dining in Mayfair).

Our evening began with canapes in the bar to peruse the wine list.  These included celeriac remoulded and smoked eel tartlet and Fromage blanc (cream cheese) with quince jelly.  As pleasant as these were, I was genuinely surprised these were the openers for a 2 Michelin starred restaurant.  Fried calamari with parsley sauce was served at the table as an amuse-bouche and was a nice combination but another surprise as this was essentially quite straight forward and certainly not as light and crisp as could be for the batter.

What was an absolute joy to have though and something I have never forgotten from 10 years ago is the cheese soufflé, otherwise known as soufflé suissesse.  This was absolutely delightful and although resting on a bed of double cream, was actually quite light and definitely lighter than it was before all those years ago – I think Gavroche has thankfully moved with the times with this same, wonderful recipe using gruyere and cheddar cheeses, cream, bechamel and egg white.  Simply knock out and the only place in the country that I have seen come close to this is Martin Wishart in Edinburgh which mysteriously to me only retains 1 Michelin star.

Artichoke ‘Lucullus’ was not my dish but I had envy when I tried it.  It is the centre or heart of an artichoke that has foie gras added and is coated in chicken mousse and slices of black truffle served with a Madeira and truffle sauce which was as rich as it sounds and fulfilling at the same time.  There is always a catch and in this case, it is the fact that this one starter is £68.  Still, not as bad as the lobster mousse with champagne sauce starter which comes in at £80 so there is always a positive comparison(!).

My terrine of goose foie gras was topped with port jelly, apple, kohlrabi and ‘dhydra8’ vinaigrette.  The foie gras was as smooth and liver-flavoured as they come, a classically generous amount given as well and the port jelly and acids from the citrus and sour from the vinegar elements working very nicely to balance.  Risotto with white truffle was also pleasing to have a taste of as well however I had tried a truffle risotto at a non-Michelin starred restaurant elsewhere a few weeks prior to this which was superior to this version in depth.

Monkfish that I had not ordered was presented with a wonderfully dark red wine sauce although it was seemingly overdone slightly from all tasting it at the table.  Venison loin was served with Brussels sprouts, girolle mushrooms and a juniper-infused jus and was an earthy and warming dish to try.  My main of ‘Dingley Dell’ pork was served with black pudding, apple puree, ‘apple8’, vinegar and pork juice.  It had all the components that I make me happy but sadly did just not quite make this happen. The cooking was fine, but the actual cut of pork itself was a little tough and whose flavour I simply could not get too excited about.   Perhaps I was expecting too much, but honestly struck me as a 1 Michelin starred dish as opposed to the heights of a strong 2.

A huge cheese trolley was wheeled to the table by one of the two sisters (apologies, I forget which of the two in the photo) who have both served at Gavroche for decades – the now fabled and purple-haired Ursula and Silvia.  The desserts included a passion fruit soufflé that was expertly done, a mille-feuille of (slightly darkened) puff pastry with caramelised apple and vanilla and blackberry sorbet, but still the star of the show I have to say was the classic white chocolate ice cream and it is still the best white chocolate ice cream there must be in this whole country.

This was always going to be an expensive meal.  The final tally with reasonably selected wines was £769, but the £256 per person was not as scary as I thought it would be.  On the food front, it was actually a mixed bag on the food front for this visit and even factoring in the higher expectation, looking at this meal with fresh eyes, there were some things that were ordinary, some things appeared and tasted to be 1-star level and some moments at true two-star level.  Bearing this in mind, I will lower my food expectations for my next visit for whenever this is, but do not misunderstand this with not looking forward to visiting this restaurant – it is a unique place I have a lot of fondness for.

In fact, a couple of miscellaneous things about Le Gavroche from me: I love the fact that each table as its own silver plated animal on each table and the service could not be more professional.  The two, purple streak haired sisters (Ursula & Silvia) are the superlative version of caring, attentive and professional service and it is a stunning restaurant.  I also like the tradition of the patron chef (Michel Roux) visiting each table to greet guests even though he is famous by TV programs, this warm hosting defines the height of hospitality and a venue that I hope sticks around and evolves for another 50 years.

The dinner bill for 4 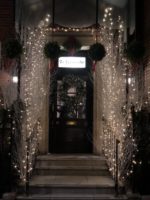 Although I have only been here once it remains one of the most special places I have been to in my life on its uniqueness.  I went a week after doing the London marathon as a special treat and with the calorific intake that the classic French tasting menu is, it was probably a good thing that I had run 26.2 miles days before in preparation of the meal.  The food was simple, French dishes done extremely well and the cinnamon pancakes with the foie gras were frankly an instant, death-row meal contender dish for being just utterly sublime as a combination (unbelievably did not get a clear picture of that dish).  Other highlights included the cheese soufflé on a bed of double cream and the white chocolate ice cream at the end.

The service here is on another level.  The staff here will cater for those with minimal food and wine knowledge just as much as those with a fine-tuned palate.  This, I believe is the hallmark of quality – to be refined and obviously high end but also genuinely welcoming and non-judgemental to those who are in need of a bit of guiding in the process.  The sommelier was absolutely fantastic in all his recommendations and the twins looked after us so well throughout the meal.  It was also gracious of Michel Roux Jr to come and say hello to us at the table and share post-marathon thoughts as a nice bonus (having been blocked by the cheese board on first attempt).  I believe this is a special place and the perfect venue in London for anyone who wants to treat their other half to something very special – something I very much look forward to doing with someone one day. 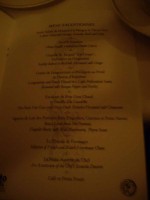 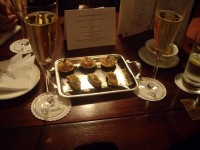 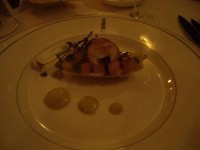 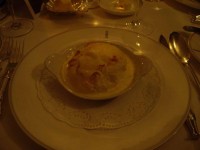 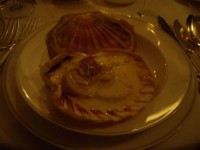 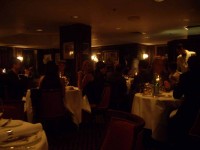 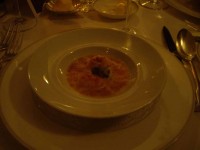 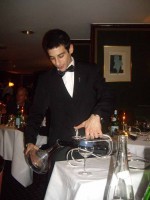 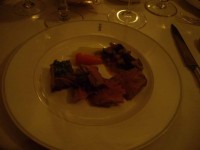 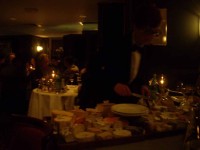 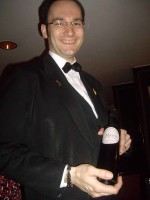 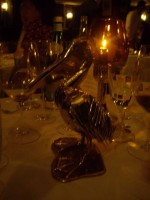 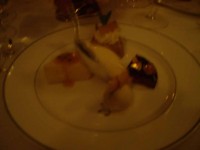 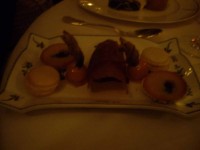 
No windows / underground will not appeal to everyone.
Very expensive.