Restaurant at the top of the Madarin Oriental hotel, Bangkok with the very highest standards of hospitality, well done food and magnificent water-facing views

Having heard from my parents going to this restaurant many years ago and saying how wonderful the service was I felt it my duty to go here whilst in Bangkok and see if it was still living up to the previous standard.  I was delighted with the result, which was that not only was this still very much the case, but the sommelier was possibly the most charming and hospitable I have ever had – unassuming, witty and genuinely considerate, he and the others seemed to enjoy serving as much as I enjoyed receiving this menu.  Several chats were had over the pop-up that the Waterside Inn did here recently and was very pleased for them that Diego had been at the helm on this little venture which I imagine was a huge success.

On this visit I had the 5 course tasting menu lunch which was actually much better value for money than the a’la carte or enhanced tasting menu on offer and the dishes served were absolutely cracking.  The amuse bouche was the only minor disappointment as the cheese puff didn’t feel right in its cold state (maybe I had it in my head it was going to be warm) and the artichoke truffle was a little bland but the apple and celery bonbon was a very good pick me up.

It was a lovely treat to be able to have Puligny Montrachet by the glass and the sommelier’s recommendations on the other white tried and the dessert wines were superb.  The frogs legs ravioli, truffle and artichoke cream soup and halibut with mustard foam and fennel cream sauce were all beautiful; I was in heaven on these and the chicken and foie gras sauce was similarly never in danger of not being liked but was glad to see that it was very well balanced (the sauce was not too rich but viscous and powerful enough to make one simply want more….which of course I asked to be made so).

The sweet trolley was, however on a different and even better level as every dessert lover’s dream.  Imagine a restaurant’s whole dessert menu on a trolley explained and shown in front of you and then you are able to have a small piece of as many of them as you wish….well, this was that.  They were all classic and lovely in their own right and so I opted for the apple and cinnamon spiced pastry, the lemon cheese cake and caramel mousse with signature chocolate sauce.

Every one of these was off the charts lovely in their completely unpretentious but powerhouse way: the pastry was delicately light and sumptuous with the wonderfully light apple and cinnamon; the lemon cheese cake was not too heavy or acidic but as good as it could possibly be with the right texture and the thickness of the base and the caramel mousse with chocolate crunch discs and chocolate sauce frankly produced fireworks.  By this stage I was the only one left in the restaurant which was fine with me, waiting for my flight, as I was like a pig in manure with the food I had and the waiter also wanted to give me a master class in making the petals in the chocolate sauce after I asked how this was done.

Finally, after the meal I had a bit of time to kill and there was a grand piano just sitting there and as my flight back to the UK wasn’t for a few more hours, I asked if I could have a tinkle and the staff were generous to a fault and allowed me to have a play which, dare I say they seemed to actually enjoy as they prepared for evening service.   It finished what I can only describe as a rather spiffing lunch and afternoon in general. The food here was simply delicious and would recommend anyone going to Bangkok to squeeze this in if they can at any stage, lunch or dinner and also recommend getting the boat to the Mandarin Oriental hotel for additional charm. 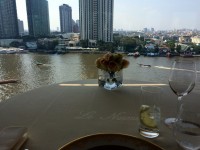 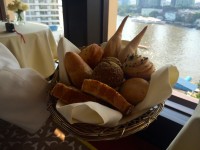 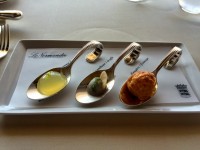 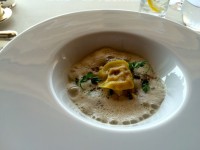 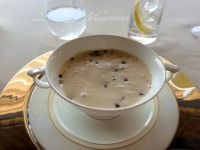 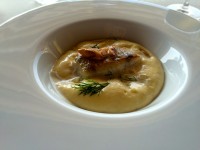 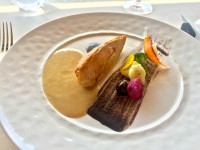 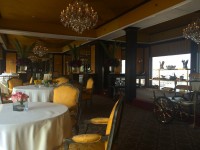 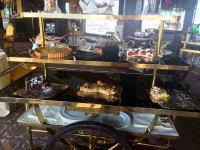 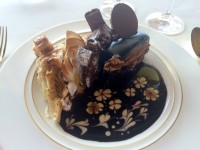 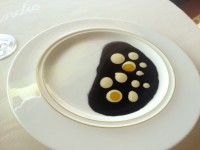 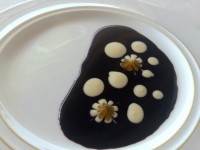 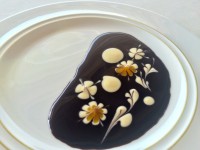 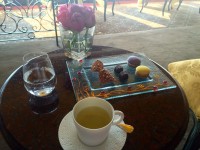