Toned down option to its neighbouring Oxo Tower restaurant set on the same floor, sharing the same wonderful views of St Pauls and Central London from the Southbank - pleasant enough food in a very vibrant and fun context

Always a nice occasion to be at the Oxo Tower which I have been to many times over the years on both sides (the brasserie and the restaurant) but is the first time I have looked on with formal ‘food eyes’.  The first thing to say is that the brasserie has much more of a casual and vibrant atmosphere as it appropriately so in comparison to its sister that sits immediately next to it and this, with the London river-skyline view it holds will never fail to be an attractive setting for any romantic or celebrationry occasion.  The staff were extremely accommodating and friendly even though it felt like they were having to spin a few too many plates for their own real comfort.

Drinks at the bar before dinner produced a very nice result in the vanilla vodka and white ‘mozart’ chocolate liqueur was quirky and fun.  It’s so similar to that which I had a City Social, it’s hard to say which one came first, but I’m afraid if there had to be a winner, there is no doubt it’s the City Social version hands down on this little battle.

The food was perfectly doable on the starters of boar on one side (rich, smokey mediteranean undertones with nice, layer of accompmanying cheese on top) and my cream of cauliflower velouté was asbolutely exquisite – I was genuinely surprised and pleased with this (surprised as I know the rough feel for the food already).  The soft shell crab was perfectly pleasant with wasabi, although the heat of the underneath sauce was such that I didn’t think it needed the large bed it was given so I left some of this aside.  All of this was followed by sharing the trio of chocolate, vanilla and toffee ice creams which, was difficult to say whether the ice cream was made on the premises or not, however the result was creamy and just about satisfying.

Overall, I would say that the Oxo Brasserie remains one of the most gorgeous venues available in London and that those that go are really going for the view and location as opposed to the food.  The food itself is pleasing but should not be confused with high end cooking (no real pride in the bread, rock hard butter at the table and a simple petit four in wrapper from a box as examples) but actually, to its credit, the Brasserie is not trying to be anything it is not – as long as one is prepared to have simple food and not expect anything else, it is a treat for the eyes as an experience with accompanying pleasing dishes. 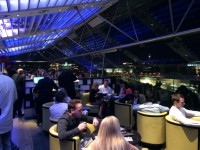 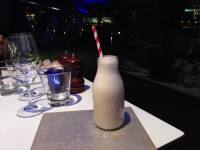 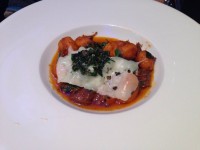 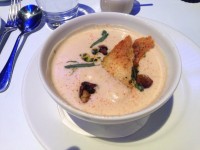 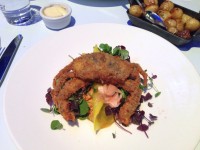 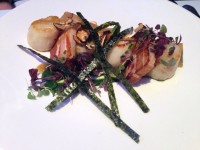 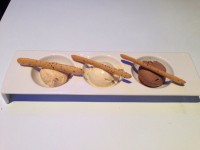 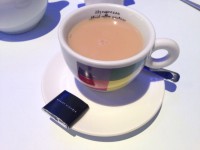 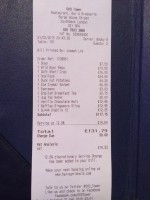 Forté is location over food.