Another star for Bristol as of the 2018 Michelin guide.  With Paco Tapas as the newest Michelin starred entry for Bristol, this now brings the tally for the town to three Michelin starred venues, the other two being Wilks and Casamia.  The latter is actually only a few metres away from Paco Tapas and the owners of the refined Casamia (Sanchez Brothers) also own this latest and more relaxed Spanish venture.  The menu options are casual and done in a pleasing way and I would happily sit in Paco Tapas grazing on their  wonderful Jamon croquettes with a beer all day.  You can easily have a decent meal here for under £30, but as the options (especially the snacks) are attractive, you could also easily tott up much more of a bill if you got easily carried away.  All details of the dishes I had are at the expansion button, but I was very pleased to have been able to pop in and will definitely be doing so again whenever next back in Brizzle.

I adore croquettes and having scoured the Basque region in Spain for their variants in their pintxos and I have to say that these ones at Paco Tapas had lovely flavour, were carefully done and the light breadcrumb coating was broken easily for the soft and gooey centre that made for extremely happy eating.  In fact, as they were that good, I had to have another portion of 2 croquettes – an absolute no brainer when they are £3.25 for the pair of beauties that they are.

I had mixed feelings on the tortilla Espanola though.  It was made with duck eggs which was nice to have a more luxurious feel and the confit onion was nicely done, but the bleeding of the egg in the centre was a surprise.  I don’t think there are any specific rules for this not exist, but the runnyness seemed to be out of place compared with the tortillas Espanolas I experienced in San Sebastian.

The Manchengo cheese and honey had to be done for only £5.50 and the honey combination was satisfying.  Quail coated in paprika, stuffed with pork and dates had a lovely char grilled and earthy exterior and was beautifully sweet inside.  The meat was succulent, juicy and of good sock.  The key here was the well done seasoning & crisp skin which made for a very pleasant experience.

Dessert came in the form in chocolate mousse with olive oil.  I am seeing this combination more and more these days as an alternative pairing to salted caramel or salt with chocolate.  It’s an interesting mix and can be done but I felt the quantity of oil on this serving was too much and became the main component which can almost be overbearing.  If I have again, I will ask the oil to be toned down, but the biscuits had a very nice crunch on the outside.

All in all, this was a lovely and relaxed place to visit and I have no doubt the other options will be very good to try.  Those of a larger and less manoeuvrable disposition may struggle a little with the high rise and small stools, but I love the easy going concept, just as per the tapas venues in Spain.  I would recommend going in just for a beer and nibbles if there are any spaces and think it very unlikely you won’t be attempted to try something else, such is the easiness of tapas. 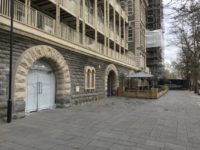 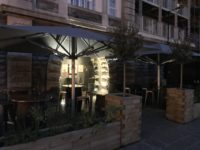 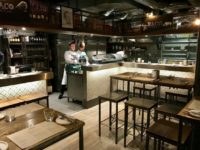 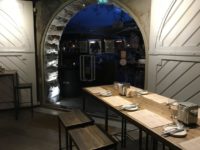 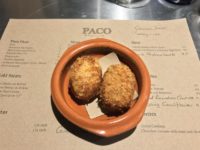 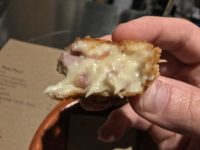 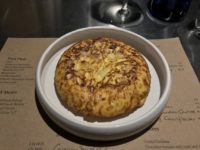 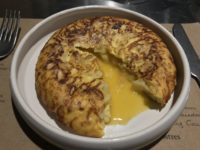 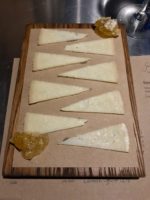 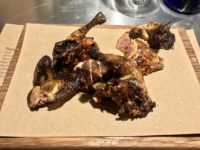 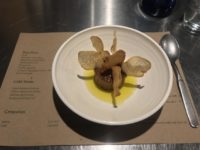 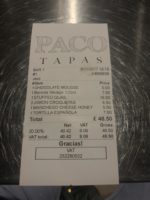 High stools may not agree with all.