This is my second visit to Paris House and this time it was the Festive 6 course lunch that was to be done in order to treat two colleagues (and myself!).  Once again I was in fine hands here and getting straight in to it, I thought the focaccia, salted bread with buerre noisette butter was among the nicest I have ever had in my life.  I know that buttered anything is never going to be in danger of not earning pleasure points but the smooth, creamy, light and almost velvety texture and flavour combined to this butter is worth singing about – I was utterly happy in this moment.

The nibbles were customarily super being crafted with such care and being clever and pleasing at the same time.  The highlight dishes for me on this menu being the cep and halibut courses (the sauce for the latter being superb).  All others were beautifully done with a refined quality on all of them and the frangelico dessert was class.  Overall the dishes on this menu did not knock out my senses as much as those dishes on my first visit, however this is to be expected when doing various signature ones on the evening visit last Summer.  There is no question in my mind however, as to the skill and quality of what the kitchen is striving for here and it was a great pleasure and treat to chat with the chef once again, who, I find truly impressive in his whole manner and way with guests – my sincere thanks to him again for taking an interest in us as diners (as he was with all those preset on the day) and it’s clear as a bell to me on listening to Phil Fanning how much prowess and confidence in experimentation there is here.

I greatly look forward to being able to come back to Paris House for a special occasion so that I have the excuse to do the ultimate 14 course evening menu at the chef’s table. 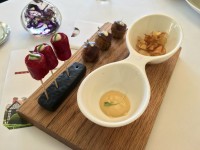 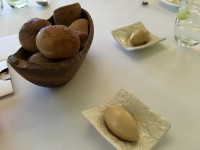 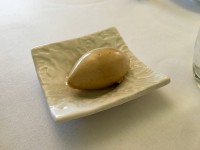 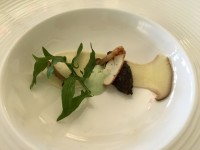 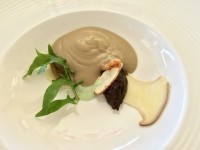 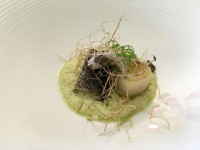 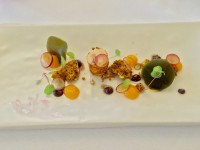 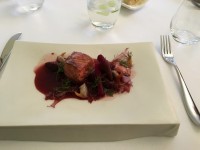 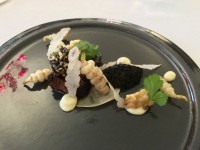 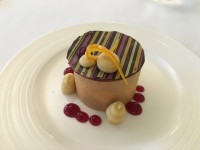 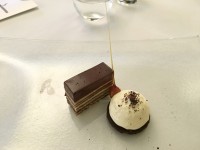 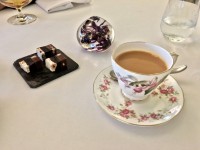 This is a wonderful setting without any doubt and as we drove through the historic gateway and along the avenue with deer on each side of the Estate road, it could not have been more beautifully picturesque at sunset.  The food here was extremely refined for our evening meal and the thought and care of planning that had gone in to each dish was evident in every way.  The food was very impressive – complex and sublime at the same time and I viewed these dishes on a very high tier amongst its 1 Michelin starred contemporaries. The detailed review is beneath the photos however, in short, this was a seriously good series of dishes that were superbly crafted and I will definitely be returning to do the whole ensemble(!).

Put simply, there wasn’t a single thing that I didn’t enjoy on this meal and the absolute highlights for me were the sausage with corn gel / salmon and beetroot gel / crackling canapés, the utterly sublime mackerel with butter milk and dill sauce (just fabulous), the complex and freshest of trout courses I have ever had and the utterly divine mandarin custard and ganache pre-dessert.  Even the perfectly warmed and salted rosemary and garlic focaccia / beer and rapeseed Scottish Balmoral breads with beurre noisette butter was a total gem of the meal, causing the need for reinforcements as soon as the first helping was destroyed. The lowest moment for me simmered at around 60% food grade wise (the John Dory) which is still quite high and was mainly due to being simply outshone by the other courses. Therefore, for effectively an 8 course tasting menu (supporting courses included) this is a very high level of consistency to have.

The only real negatives on this meal were a couple of mis-communiqués between the staff, which resulted in extended waits for the bread and the bill separately (as the requests got lost in the ether). The service was flamboyant throughout the meal but I felt needed a touch of polish (an accidental over charge on the bill occurred as well but was easily rectified). Ultimately, we were in very good hands and most importantly, the staff were all striving to create a pleasant experience.

It was lovely to be invited in to the kitchen and even more of a pleasure to briefly chat with the Executive Chef and owner, Phil Fanning who was the consummate host. Very interesting hearing his thoughts on the design of the menu and hear from the floor manager how the vegetables in their garden are used for the dishes right down to herbs being plucked and used minutes before service where this can be done.   It was also great to see the Chef’s table in the Kitchen accommodating a couple and not restricted to only bookings of 6 or more as so many chef’s tables are (especially in London). I applaud this loudly as not everyone has 6-8 friends who all want to spend the highest tier for fine food, and based on the courses I had last night I believe this Chef’s table here would be a superb option for a marathon of enticing and exciting dishes.

This struck me early on in the meal as comfortably sitting in the top third of 1 Michelin starred venues and frankly I failed to see the difference between quite a few of these dishes and those in many of the twenty-four 2 Michelin starred venues I have eaten in so far (as at Jul 15).  A VERY strong 1 Michelin starred meal as a result and I will definitely be returning with vengeance for the full-blown experience as this place clearly has a great deal to offer. 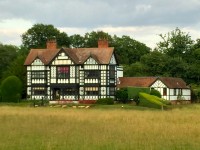 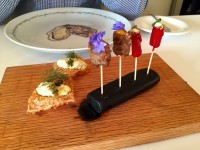 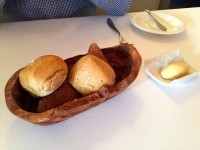 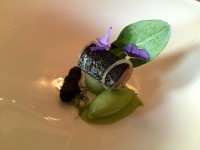 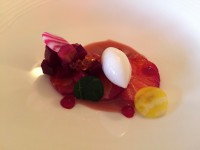 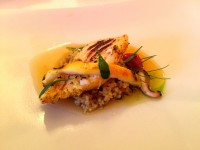 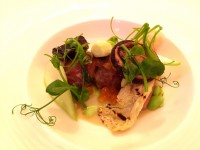 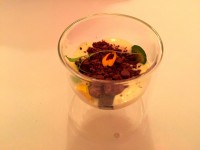 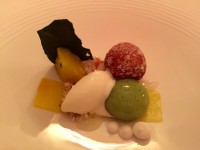 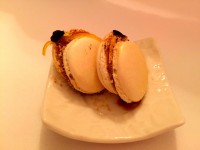 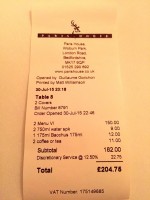 The bill for two (limited drinks) 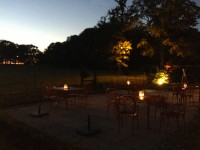 Front terrace in the evening 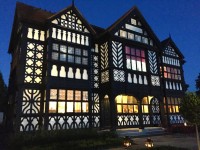 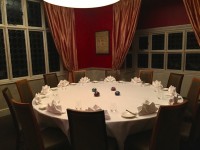 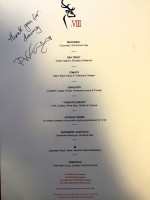 The wait prior to being seated.
Some staff-language barriers causing minor delays.