An entirely fulfilling visit to newly promoted / Michelin starred Peels at Hampton Manor.  One of the nicest take aways from this visit was having discovered how utterly in to food the management at all levels at Hampton Manor were.  In their limited spare time they are usually exploring great eateries like myself in a mix of passion and research.  As usual, I had no idea what to expect from this new visit and the following is what I found.

The pickled shallot, veal tartare and potted shrimp canapés by the log fire in the lounge were a nice start and the hospitality from the off was frankly A grade in all ways – warm, unobtrusive and attentive.  The amuse bouche of potato puree with a pickled touch of potato puffs and powdered vinegar was one of the highlights and rather like very elaborate salt and vinegar crisps, this was a true delight and a much more interesting take than a normal velouté as an amuse bouche.

The butters including a wagyu dripping for the bread were so comforting and I was really impressed with not only the way the beetroot was complimented by the goat’s curd but was doubly complimented by such a good pairing of English white wine (Devenport) whose fruitiness came chiefly from the bacchus grape.  This was actually one of the most immediately hand in glove food and wine pairings I have experienced in a while with the wine itself almost as beetrooty in subtleness as the dish itself – a perfect combination.

Then on to the mackerel with soy glaze, puffed rice and sesame seeds and this was also excellent.  The sugary and aromatic twist was a lovely and fresh approach to the wonderfully oily fish which I happen to love.  The wagyu interlude with parsley mayonnaise was a nice touch and had a cripsy exterior and juicy meat inside.  I was actually sold on the set dinner menu mainly on the wagyu option alone and although this was a pleasure, it was on a similar threshold of going back to Business class if you have had the first class treatment of wagyu in Hong Kong and Macau (Bo innovation and Robuchon au Dome).  Although this wagyu wasn’t as literally melt as per butter in comparison, the aforementioned are 3 Michelin starred near many of the 100% wagyu livestock and so is slightly unfair to expect this but it did have a superb medeira sauce to go with which I was wishing to finish with a spoon at the end.

Pre-dessert of buttermilk mousse with passionfruit again, like the amuse bouche was an original and pleasing offering and the deconstructed apple crumble with rum-soaked apple and douglas fir custard was interesting and enjoyable.  Although I was originally concerned with the amount of components on the chocloate finish, I actually enjoyed getting a different ‘hit’ with each fork-full and each element, especially the salted caramel at the extremes were well done indeed.  Initially I was surprised by the vinegar coated chocolate tuiles – they were among the lightest and delicate I have had but somehow the sweetened vinegar edge did seem to serve as softener to the richness of the other components quite well (for me, a touch less sharpness would have removed the shock factor more).

The meal was finished off by highly original teas and coffees worth a visit for in themselves and what was evident was how gelled as a team all the staff were at Hampton Manor.  It was a total pleasure discussing food love issues at the end and the bond bewteen the staff was obvious to see all round which has nothing but a totally positive impact on the diners who I saw receiving the exact same engagement at dinner.  I left with that undeniable skip and a jump feeling as a result all round and I would heartily recommend you go to gain the same feeling especially on a note-worthy occasion. 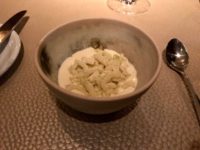 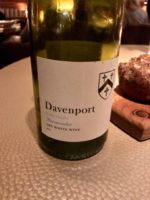 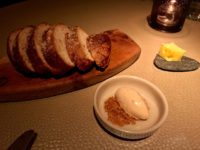 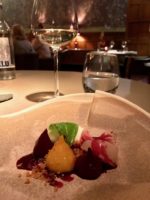 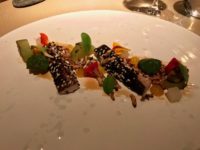 Mackerel with soy and sesame seeds 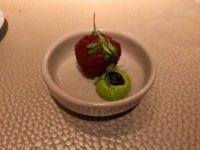 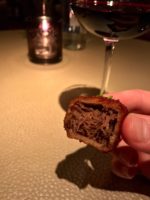 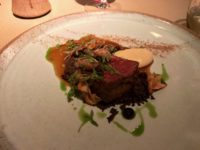 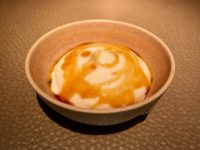 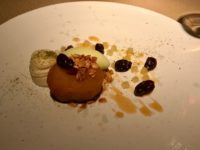 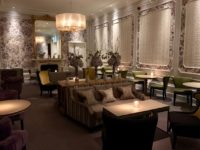