Pied a Terre is a cosy, 1 Michelin starred option (2017) in the lovely area of Charlotte Street, London W1.  It is very much a French experience in food and from the staff and for the products gave a set lunch at £54 for 3 courses (turning out to be 6) including half a bottle of wine, water and coffee per person which is, for this level of products a good package.  One or two minor down sides of this experience dented what was otherwise a good meal and the venue is ideal for quieter and perhaps snug occasions.

The meal started with snacks of taramasalata with cuttlefish mousse and vine leaves which were essentially complete opposites – the former being light and pleasurable and the latter being very dry and bland.  The bread was home made and whilst it was very nice to experience the focaccia, it is exceedingly difficult for anywhere to beat the focaccia of Noble Rot and The Sportsman.

The braised goat shoulder with fennel and tomato was actually packed with flavour, had decent crunch and balance and the buratta and salad starter was a simple, refreshing and visually appealing starter.  An interlude of very pleasing mushroom foam and ham was brought to the table and it was not clear if this was given to the table on account of this site or whether this was the norm – my gut says it may have been the former and whilst this certainly was an extremely good interlude, I will assume this is not the norm as I did not see other tables receive this and therefore discount from the overall value for money.

The mains were lamb and cod.  The lamb with aubergine purée, lamb jus, cucumber and orange had good return on the deep jus but it was overdone to the request which was rare – medium rare which was a shame to get this basic wrong.  The cod with seaweed butter sauce was an absolute delight, but for the price it was a little bare of vegetables which I think could have easily been included more to upscale the size and balance of the dish.  The cod itself was beautifully done.

A yoghurt mousse with walnut purée and honey was a pleasant, little pre-dessert although the walnut purée was set quite hard at the bottom so getting all of the components at the same time (as intended) meant having to dig quite substantially as the minor negative.  The desserts then came in the form of banana, chocolate, vanilla mousse and cherry which was a simple and effective dessert, followed by three cheeses (Pave d’Auge, Monbien and stilton), all of which were nicely chosen and a good mix without over doing the portions.  Petit fours were particularly good with the classic French canelés, soft and juicy orange gels and prunes that were soaked to a very good level.  Interesting to see the similarirties and simplification since 6 years ago having the same.

Overall, this was a fully competent meal and the only food negatives were the one snack, the lamb and perhaps downsize of the dishes, but the flavours and presentation were good to experience again.  Two other things stand out: 1) I came to learn that the L’Autre Pied (Pied a Terre’s sister restaurant) is now closed and all eggs have been placed in to the former 2 Michelin starred basket of Pied a Terre, and 2) one of the waiters at this lunch towards the end was almost argumentative with our table on receiving a request to identify the cheeses which soured the experience somewhat and was very surprising to have this at this Michelin starred restaurant.  I accept that the star is officially given for the food alone (although this is hugely debated), but it was surprising to have an abrasive finish after being looked after so well by the bulk of the staff including a particularly hospitable Sommeiler.  The observation with the waiter was explained to the management at the end in order to raise awareness and this was gracefully received as far as it could be.

A good meal showing general authority with one or two aspects to improve for the overall experience.

Interlude of mushroom mousse and ham

Lamb cutlet with aubergine and kumquat

Cod with seaweed butter and turnip

The lunch bill for 2

Not really much to say about this venue other than when it had 2 Michelin stars it was tried with high expectations but sadly lacked the flavours to back up the accolade.  The unfortunate truth is that the only stand out memory for here was the creatively fun amuse bouche and petits fours selection.  Other than that, I did not leave with any lasting thoughts.  It certainly was not bad food, but just simply nothing to sing about and displayed only good cooking and that was all.  I certainly would not make it a point to return immediately, but it does have a superb pre-theatre menu at very good value for money, however as a slightly more out of the way option, I would probably only go if it suited the location of the show.  Such a shame. 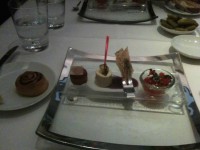 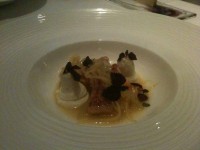 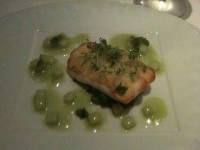 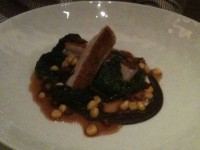 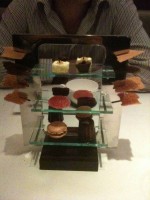