It will be hard to not feel affectionate for this little place that opened at the beginning of 2015, from the one, candle-lit rest room, to the view of the kitchen by the coat hangers, to the cosy, snugness of the restaurant inside.  I’m also happy to state this was one of the best meals I have had all year.  Each one of the four courses were simple, yet refined and there wasn’t a single course that wasn’t a total joy – some were simply even more of a joy than others!  It’s also a testiment to any place when you are already planning when you can come back and with whom before the end of the meal….and this is exactly what happened here – one of my new, favourite places now in the whole of London.

Kicking off with one of the loveliest snacks I have had in quite a while (and not since Kitchen Table at Bubbledogs), this onion crumb, bacon jam, onion gel and parsley emulsion on chicken skin brought immediate tingles down my spine it was that superb – the sort of superb that was basically a legal high.  This preceeded sour dough from Dalston with yeast and salt brown butter which was likewise utterly sublime.  So much so, in fact I was forced to order another round.

The ewe’s curd with golden beetroot kombu and aged soy was a light, smokey and a perfectly pleasant start to the meal.  The cod was a gear change upwards in that the fish was perfectly succulent and with the cashew butter sauce, sweet Jerusalem artichoke, texture from the cashew nuts and tempura fried mushrooms, this was an earthy, dish of contrasts that simply came together beautifully.

Thinking things couldn’t get any better, the sirloin piece with gorgeously pickled walnuts, glazed beef cheek, celeriac puree blew things open again as this dish was frankly one of the very best dishes of the year.  Such a lovely collection of everything and lovely that the kale was there to make it feel like I has had some element of healthiness without ruining the proceedings.  This was followed but what I can only describe as a cruise missile strike of the banana dessert which was also one of the best desserts I can actually remember.  I’m a dairy fan and so the milk ice cream with black salt (very good combo by the way) and droplets of condensed milk gel was simply divine and with the banana curd-like topping on lovely crisp pastry was instantaneously in the memory banks.

I’m simply bowled over by this little place and equally surprised that the menu changes on a weekly basis.  I know of some establishments that once gained a Michelin star will stick to favourites for many moons as tried and tested.  But I think this is a prime example of brave and confident invention from head chef Dan Graham to be continually pushing the restaurant’s menu in this way and if this first visit is anything to go by, I am returning here as soon as I can to enjoy with others. 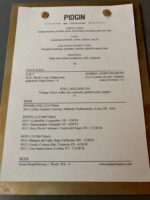 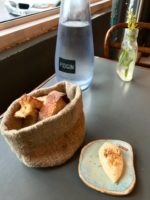 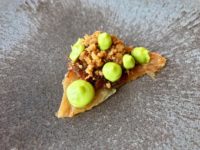 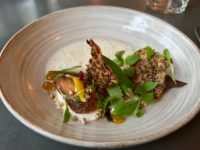 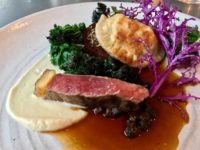 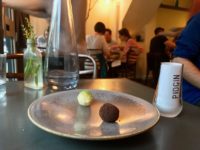 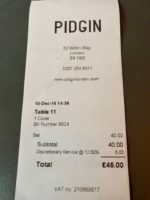 The lunch bill for 1 (no drinks)