Red Fort has been with London for some years now (since 1983) and it was nice to try such a long-established Indian restaurant in London and see its differences.  The key one being that the cuisine hails from the Mughal era, taking its influences from the spices that came from territories to the north of India (those in central Asia, Pakistan and Bangladesh).   These spices have a reputation of being quite strong and this to me is always a potential drama as I do not handle spice very well however, the headline is that I was completely relieved on the night as these were kept nicely under control with some overall, pleasing dishes.

The folded popadoms were slightly harder in texture than popadoms most will be used to and the good thing about this meant that they were in fact, not dripping in oil at the same time.  The latter is probably what most can relate to which I do find off-putting when this occurs.  As a sauce man I do enjoy the prospect of a decent chutney with an curry and ever since my early years training on the plains of Warminster and Brecon Beacons, the thought of dipping popadoms and virtually anything in to chutneys kept me sane and going at the best and worst of times.  The chutneys here were a pretty good start it has to be said, including a) mint, coriander, garlic and green chilli b)  tamarind, royal cumin and jaggery and c) mango, fennel and onion seeds.  I think tamarind is actually my favourite spice within curries now but all three of these were highly doable and an interesting twist of heat to the mint chutney as something different.  The portion sizes were not really sufficient as two further reinforcements were needed, but these were provided without hesitation.

The Seekh kebab with supporting chutney had a stronger punch of spice to them than expected but was actually a ‘clean’ kick as opposed to nasal rocket fuel spice that can very often happens with heated cuisine.  The soft shell crab was enjoyable with just enough of the aromats coming through and not being overflowing with oil at the same time – this was far nicer than the Michelin starred soft shell crab experienced at Brasserie Chavot.  The Dum-Pukht Biryani would not be my first choice of curry flavour in its earthiness and less viscous sauce in comparison to my sweet tomato Murgh Bemisaal (the latter being extremely good).  But one aspect the curries both had in common was the fact that the poultry meat was utterly tender – so much so this was actually a repeated talking point and highly enjoyable.

Finally, desserts: the Ras Malai dessert (lightly spiced cottage cheese with reduced / sweet milk) was an acquired taste – in reflection I would have preferred a simple kulfi as the reduced milk was a little watery and bland for my palate but was good to try and authentic dessert at the same time.  However, the traditional doughnuts with with cardimon infused syrup were much more appealing in their natural sweetness and rounded off the meal well – a simple, cleansing and effective dish.

Service was particularly warm and hospitable from the floor manager and all staff appeared to be attentive to all tables on this visit.  The sommelier was reassuringly confident with the options available to match each course and the white Chardonay and red Pinot Noirs opted for were certainly pleasant and matched well enough for their corresponding dishes.

All in all it was a pleasant experience here and the dishes were well done within thier lanes of hearty cuisine.  If you can get passed the fact you need a bouncer on the door to ward off the sartorial splendour of Dean St on a Friday evening as you dine, this is a Michelin recommended Indian restaurant with some simple and honest food with a very good value pre-theatre menu (£18 for 3 courses) as a useful gem up its sleeve.  This visit to Red Fort was a press review. 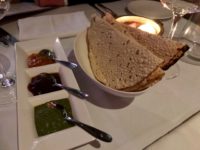 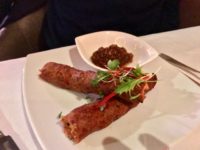 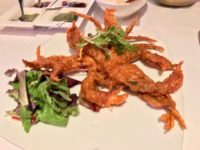 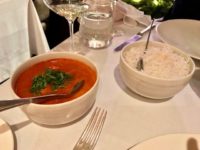 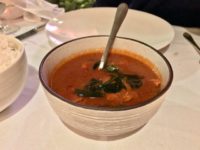 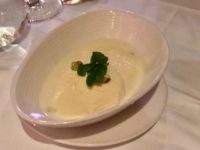 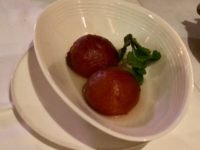