This was a mixed emotion visit as the food was actually very good but I was left wanting to leave in a hurry owing to the time lag and overall experience sadly.  The venue has been recently refurbished and is bright, breezy and very pleasant, especially with its terrace, canopies and garden.  Actually there were some perfectly decent products being offered here on this lunch menu, but as mentioned, the service really did mar the show.

The bacon bread was a total pleasure as were the thoughtful canapés and the burnt butter with vinegar was an utter delight to dip the bread in to.  The set lunch menu was more expensive to most 1 Michelin star set menus I have seen, but was still a far more reasonable option than the a la carte.

The sea bream main was extremely good with a nice pre-dessert mini cone, brought out by who I presume was the chef de partie who made it which was a nice touch.  It was a smooth ice cream flavoured with subtle beetroot and was pleasant enough.  The deconstructed tiramisu was pleasing and it rounded off the meal very well.

However, what was a shame on this visit was having to wait 30 minutes for the bread. This was also after asking the staff at the beginning of the meal to progress the meal as quickly as possible owing to other commitments.  Even if this hadn’t been requested, this is far too long to have to wait and caused me to remind the staff, which I haven’t had to do in quite a while, least of all at a Michelin starred restaurant.

I was also not very keen on being asked how the meal so much after each course and in some cases before I had even tried the dish.  All this did was  show me that some staff weren’t paying enough attention or were perhaps fishing for self-fulfilling reassurance first, rather than have the diner’s interest at heart.  The fact that the ‘optional’ service charge was already placed on the bill with the above occurring also showed an overt confidence and there were moments where the hospitality made me feel as though I should consider it a privilege to be there.  Sorry, but these days, that just doesn’t wash with me and although this probably wasn’t intended by the staff, these signals easily come across and are not so small.  In retrospect I should have obeyed my instinct and asked for this to be removed based on the performance, but that would have delayed things further without doubt.  I gather that Simpsons, to their complete credit, are reviewing their service charge and changing it as of Dec 16 anyway.

So, a lovely menu but unfortunately the above, combined with a self-assured delivery, made me want to leave more speedily than usual. However, if you have time on your hands and you are tolerant, this venue has some very agreeable food. 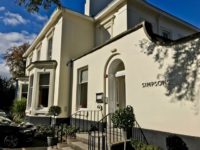 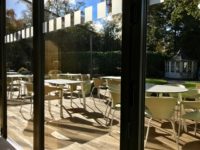 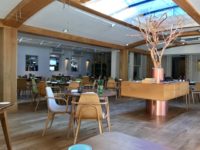 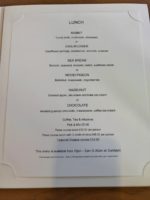 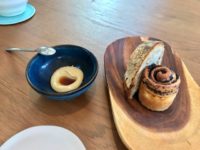 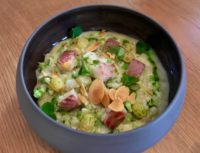 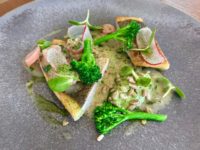 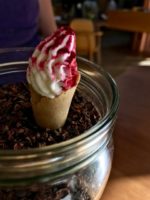 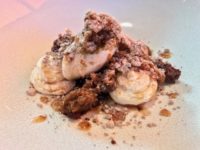 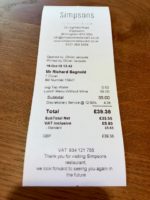