SOLA is one of four, brand new 1 Michelin starred restaurants for London in the new 2021 guide and one of seventeen, new 1 stars in the UK.  Based in Soho, SOLA’s cuisine is from the West coast of America with a predominantly Californian wine list and is owned by New York chef-patron Victor Garvey.  My executive summary is of all the new (2021) 1 Michelin starred venues I have been to so far (the majority), SOLA is not only comfortably in pole position of these, but is actually the venue I am more excited to return to over many others of greater acclaim in the UK right now.  For a full outline of why this is, please click on the button below.

Firstly there are two choices for the menu – a five-course menu for £89 or a nine-course menu for £139.  As this was a special occasion, I decided we should go for the full tasting menu with matching wines from the sommelier for an additional £110 per person.  The wines, all from the New World included a notable Riesling from the Nelson family (Mendocino County), a Chardonnay from The Joy Fantastic (Santa Rita Hills) and a delightful Pinot Noir from Baxter Vineyards (Mendocino).  Strangely, I was less taken by the Muscat from Channing Daughters and the Henrique & Henrique Madeira, but these weren’t deal-breakers as are easily substituted – more on that later.

For welcoming snacks whilst perusing the wine list, there was a trio of small bites including a parmesan gougere (with a soft centre) and parmesan straws, both of which had an excellent aroma and flavour of parmesan and some agreeable, treated almonds.

The first official course was three, larger bites called Scombridae (done three ways).  Scombridae is the tuna, bonito and mackerel family name and variants were offered in cured, raw and smoked formats. Cured king fish, (a giant mackerel), served with pistachio salsa verde and Oscietra caviar (looking like a Californian roll piece of sushi) had a soft, luxurious feel to the fish and the Oscietra was a welcome break from the lower grade Exmoor caviar used in too many other restaurants who seemingly charge the same amount for a cheaper kind.  A smoked mackerel tartare with anchovy butter and a Roscoff onion parsley salad that was slightly fermented and was a refreshing bite in a delightfully thin pastry tartlet.  Finally, preserved Spanish Bluefin tuna was served with foie gras and Australian truffle.  This was absolutely knock out, and with a beautiful harmony together, all held between two wafer-thin and light pastry sides.  All lovely and the fish being sourced from the Notting Hill Fish Company.

The second course was a tomato dish, but frankly, this was more a celebration of tomato.  A sorbet of tomatoes, made from Provence tomatoes was utterly sensational and the most powerful hit of tomato essence I think I have ever had.  This was complemented by homemade burrata which held a consistency like egg yolk and burst to mix with the other parts when pressed. These other parts were three types of melon (watermelon, cantaloupe and honeydew melons) and a consommé made from tomatoes and cilantro (a form of coriander).  There was a purity to this dish with all ingredients being at the top of the tree, working in absolute harmony together and was essentially a showcase of a humble fruit. I haven’t had reverence like this since having a pear in 2 Michelin starred Ryu Gin in Hong Kong.  There was also a perfect salt content to the fluffy and oily focaccia tomato bread which was used to soak every last part of the dish.  I loved the play of fat content of the cheese and bread with refreshing consommé and the warmth of the latter to the cold melon and tomato sorbet – this was a fabulous dish in every way.

Crab from a Devon Brown crab, fermented in its own juices and vinegar, was served with a delightful pea mouse, miso and jalapeño foam, shiso leaf and citrus (ponzu jelly).  This was a lovely dish, with a subtle and well-judged, light kick of heat from the foam and with good, fresh crab underneath.  On the side was a soft-shell crab from Dartmouth, treated using brown and white crab meat, served with seaweed tempura and a ponzu jelly and was a pleasant crispy snack to the delectable foam.

Huge langoustines were next.  Extra-large Scottish langoustines were luscious to taste and were flambeed at the table using Hibiki (a Japanese whiskey) on a hot stone.  These were to ‘bite’ using hands and were next to a broth of, soy and ginger dashi that decorated a wild mushroom and foie gras dumpling and quail’s egg. The hit of umami on this dish was exquisite and is the only example on record I can think of where the langoustine and broth have been served in a way whereby the langoustine is not decimated by the broth.  The theatrics of flaming the langoustine at the table was very pretty, but the joy was to be able to have the sweet langoustines away from the broth but ultimately together.  A very clever move with ultimately a gorgeous hit of umami all in.

Turbot from a large 8kg fish was next and served with sea samphire and a very light tempura made with leek, a beurre blanc sauce made with yuzu koshu (a blend of yuzu citrus and chillies) and finished with caviar.  The stringy tempura was actually close to tempura that is offered in multiple establishments across Japan (a different world to UK ‘tempura’ akin to thick batter and an insult to tempura) and provided a lovely crunch to the beautiful turbot that it was with sauce good enough for a refill.  My only criticism for this dish being it was a very small piece and was over very quickly, but I understand that the price of turbot rises significantly the larger the fish, hence the smaller portion.  In hindsight, I would have paid a supplement for a bigger portion if offered.

Guinea fowl was next and came with artichoke and a supreme truffled sauce with ultra-thin squid ink tuiles. The fowl was nice and succulent with more yield than I was expecting.  This dish was not complicated and strong – it had just the right amount of ingredients needed and was a simple pleasure, particularly with the well-chosen Pinot Noir from the sommelier.

Turning to the sweets, a lemon-based pre-dessert was first, made from Sorrento lemons.  A creamy lemon ring was served with meringue shards, yuzu, vanilla cream and crème fraiche and was very agreeable. The main dessert was even more serious: a chocolate and coffee dessert using Panama Geisha coffee from Difference coffee, which, for interest is arguably the best and rarest coffee on the planet selling for anywhere between £12 and £18 a cup retail (interestingly, this is actually not as bad as you might think when comparing to the equivalent margins of far lesser grade coffees).  The dark chocolate was silky smooth and came with equally lovely, caramelised white chocolate spheres, a superb, salted caramel sauce and porcini/coffee ice cream.  The matching Madeira was my only gripe here in that I appreciated the match, but it was just a bit too much for me, almost like a double shotgun of bitter to end on, so I actually enjoyed a glass of something different, to which the sommelier arranged without issue.

Although I didn’t go for the tea, I was delighted to see that the tea served is from Lalani and Co who are one of the few, if not the only artisan tea providers that specialise in the finest single-batch teas in the world from family-run gardens.  Petit fours were flayed at the table briefly and probably the only things I did not shine to much as nougat is quite sticky and tricky and the sugared gel was powerfully sweet, but by this stage it mattered not as I had had some of the best dishes had in a long time.

The bill came to £306 per person and whilst on the surface expensive, this is the full tasting menu with aperitifs, full matching wine menu with generous measures, 15% service charge on the top and the quality of the ingredients sourced are in themselves more expensive.  The fact that they were done to this technical level makes this a no brainer for me.  The only thing I might change next time for interest, is not opt for the matching wines as myself and my guest ended up stacking quite a bit and I had to slow down at one point before going overboard, or, more accurately, under the table.  The portion sizes of the wine glasses were so generous that I would probably share a matching wine tasting menu next time with a dining companion or better still, share the premium matching wines as a sensible move.  On a miscellaneous note, the service was very hospitable, the atmosphere nice and casual with fun background music and with the added theatrics of people from all walks of life outside on display through the street windows, throughout a Friday night show of Dean Street.

As a close, there is serious care of ingredient sourcing and technical skill executing these dishes at SOLA and as a result, this was the highlight meal of my year so far.  In my opinion, SOLA is not only one of the strongest 1 Michelin starred restaurants in the UK, but dishes such as the tomato, langoustine and coffee dessert are comfortably 2-star material and I was already thinking on my way out of this meal when it might be that I can come back – that’s a fairly good sign. 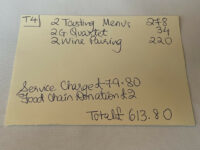 The dinner bill for 2 with matching wines