I managed to get to the bar of Sosharu on a chance walk by and had enough time to try a couple of snacks.  The wagyu salami was customarily lovely with a refreshing kick from the mustard and the tonkatsu sandwich was absolutely lovely.  The bulldog sauce was a Japanese curry sauce for the breaded pork (tonkatsu) sandwich to be dipped in to which turned out to be a nice touch but the crunch within the soft bread of the sandwich was absolutely delightful. It actually reminded me a little of the winning texture of the sandwiches at The Fat Duck and that is a fairly hefty connection.  The negroni cocktail wasn’t too bad either.

The bar itself is an underground enclosed area which has similar design to Social Eating House (unsurprising as another Jason Atherton venue).  It is not the largest bar for popping in to for a bespoke visit, but for a holding area of the restaurant, it is a superb asset to have and not many other restaurants have this as an add on. 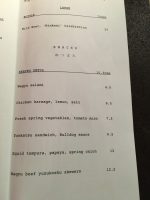 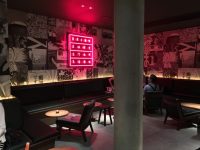 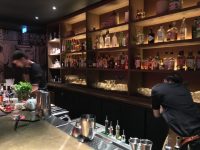 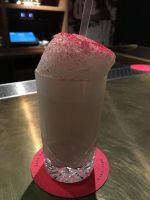 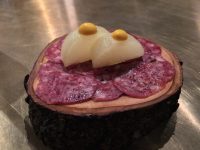 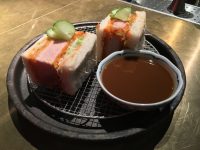 Jason Atherton does not appear to hold back on expense with any of his ventures and the look of this plush, new Japanese restaurant on the outside and on the inside would certainly back this up.  Huge, glass walls with new brickwork on the outside cover a serene and Japanese styled interior with mini sofa chairs (that hold two people) and wooden structures separating the areas of the restaurant, all overlooked by an open kitchen.  The look is certainly lavish but with a minor price tag of being slightly impractical in places (our waitress had to literally lean in to me on a couple of occasions just to reach for things on the table from around the wooden décor).

On to the more important parts however, and for this visit, two set menus were had as well as a la carte dishes for the three of us.  As a headline, I thought the food overall was a very good show, but not without a few ups and downs.  Dealing with the good first, I thought the creation and style of the dishes was exciting and there is definitely theatre here – those opting for the scallion tobiko starter gain their own chilli mayonnaise dispenser bottle, the wagyu beef dish needs to be cooked at the table with a clever, Japanese compact heater kit and one can also enjoy mixing certain dishes at the table adding soy from a dinky soy container as required all adding to the fun of eating out.

Sticking with the positive, I thought the simple Asian pear and avocado salad was marvellous with its creamy but light dressing and Asian pear chunks that were probably the sweetest I have ever tasted.  My tuna scallion tobiko was great in its crunchy and light delicacy, backed up with the fun of the chilli mayonnaise squirting that could be added as necessary (lots in my case) and the sea bream sashimi with fried potato was equally lovely.  The wagyu, as mentioned, was playful and even the slivers that you gain for this dish for £25 are only a few mouthfuls, it was an interesting way to enjoy the unmistakable richness of the beef.  I foolishly didn’t ask whether the beef had actually come from Japan, but one would hope so (worth asking because as long as the bull is wagyu, the offspring will qualify as wagyu regardless of the breed of the mother, which is why you see more of it available in supermarkets these days).

Other aspects of the meal were definitely interesting but either more like a rollercoaster ride or simply not very remarkable.  Green tea was ordered at the start of the meal and both myself and another at the table really did not like it very much surprisingly and a little warning that their house green tea, taken from the roots of the plant rather than the leaves is almost nothing like conventional green / Jasmine tea as this had a strong, earthy peaty flavour.  I very rarely ask for things to be replaced but was moved to on this occasion for both of us and thankfully the management was very kind to provide something else as a result which was slightly sweeter tea made with cherry extract (a little better).  The scallops with frozen stock inside were also a huge surprise to my fellow diners who were not bluffing in their reaction, which was one of the most visual I’ve ever seen, looking as if a fire cracker had gone off close to their face as soon as they popped it in their mouths.  As I need to avoid scallops, I left this to them but they said it was like having an immediately fresh and salty yet strangely exhilarating ice cream headache.  Of the two diners, one said they would have it again.

The chicken and the pork on the set menu were nice to haves but simply sat at the pleasant level.  They were certainly fine to eat, but the breadcrumbs for the chicken didn’t seem to offer much herby or distinct flavour.  Everyone also agreed that the pork, although nice and with a fair curry sauce, would have been more of a pleasure if the batter crisp was not so thick and the succulent and fatty pork was perhaps thinner (easier to get through).

But, to finish on a high, where everyone was absolutely unanimous, was how fantastic the strawberry dessert was with the accompanying jar of strawberry sauce which was surprisingly on the set menu (perhaps to showcase itself more easily).  This was possibly the most delightful version of iced strawberry had.  The shavings of ice that were covered in wonderful strawberry ice cream, wild strawberries and as much of the sauce as you wanted to throw on to it I thought was easily a 1 Michelin starred as a dish – this was clear as a bell and obvious.  The banana, peanut and syrup sponge dessert was also another highlight of the meal in how all the very different and separate components were not only very good individually, matched superbly when all put together.

Lastly I should mention that in tieing up with the no expense spared theme, even the trip to the toilet stands out for this visit which I can’t leave out.  All toilets here have been designed very much to Japanese specifications in that men and women all have their own, separate cubicle, having Japanese music playing in each and are all electrically operated.  I had to take pictures of this as it was rather amusing, and one can select how much oscillation you wish your toilet seat to have as well as electronically positioning it whilst all seats seem to be heated regardless.  I got a bit excited and the gadgets to operate with this and was almost stuck when trying to work out how to flush however, I can report this is a metal button behind the electronically operated lid on the wall(!).

Overall, I thought this was a fun and impressively aesthetic restaurant with some wonderful dishes but also some surprises of mixed degrees in other ways.  I think the £29.50 for the set lunch was superb value and this was its biggest forte on this visit.  The downstairs bar was unfortunately closed but hopefully when next passing next time it will be when it is open and I will drop in to enjoy something refreshingly different – something I have absolutely no doubt will be the case. 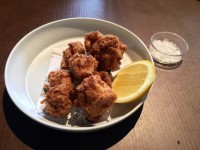 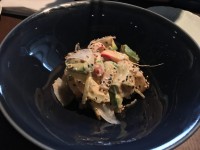 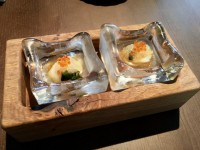 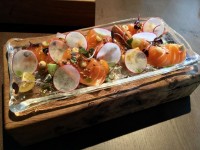 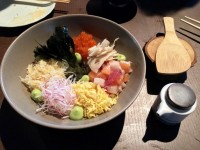 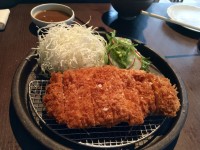 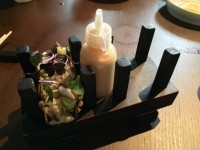 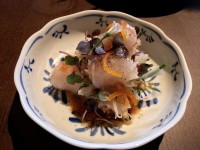 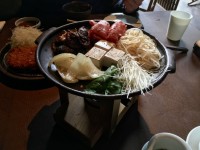 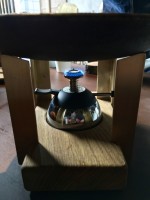 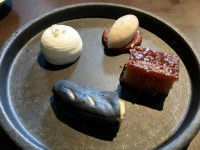 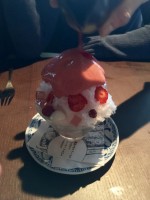 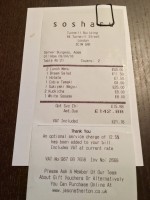 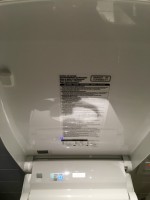 Electronic read out for your WC seat 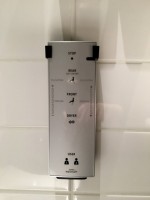 Controls for each WC 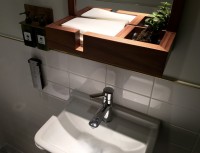