A return visit to Fergus Henderson’s sister restaurant to his Michelin starred St John in Clerkenwell.  In case you do not see the first review of this restaurant, one of the big differences between them is that this venue serves breakfast until 1130 whereas the Clerkenwell and larger venue serves just lunch and dinner.  For this drop-in visit, however, a few bites of the lunch menu were just as welcome.  These consisted of duck hearts with a strong garlic aioli (too strong for me) for £6.90, Welsh Rarebit (£7) with a fine bechamel topping on a huge slice of toast (I think would have even better if the slice was not as thick and more akin to how it is done at Wilton’s) and an absolutely silky smooth cod’s roe with stunning confit potato slices.  The potato slices themselves are ‘glued’ together with duck fat before being pressed and fried in vegetable oil – very similar in style to those served at Quality Chop House and with equally wonderful effect.  Service was a little rushed unfortunately and our waiter evidently wanting to get away from customers as quickly as humanly possible. 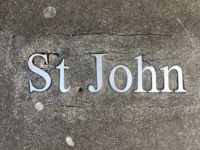 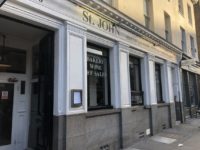 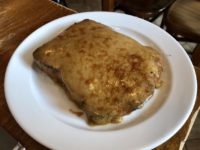 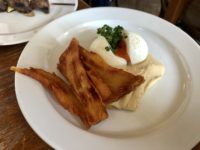 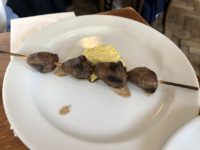 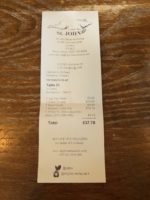 Fergus Henderson is the brainchild and institution behind Michelin starred St John and this, its even more breezy and smaller sister restaurant.  Unlike its Michelin starred sibling, here breakfast is served and this was the purpose of this visit.  It’s confirmed as a quality option for breakfast with classics such as Scotch Woodcock, deviled kidneys on toast and bubble and squeak with homemade brown sauce.  The fried egg was orange and perfect, bacon ‘sarnie’ was great owing to such good bacon and the homemade brown sauce was grand.  Breakfast is breakfast, so there is no downside about it not ‘scoring high’ compared to gourmet food as is not the point – this is just quality breakfast in an unpretentious environment and I would come here in a heartbeat over other chain brasseries that claim to do breakfast well. 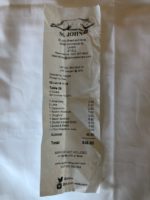 The breakfast bill for 4