This small restaurant (approx only 8 tables in total) has held a Michelin star for over a decade and its trump card is the local catch. The head chef creates a changing daily menu based on what arrives to the restaurant on each delivery.  Care and pride in the products was evident here, seen immediately in the hand-written menus as you enter but alas, the overall package did not stand up to its Michelin starred peers very highly in terms of flavour and design.  Complacency is too harsh a word, but the inflated tasting menu price for the punch, combined with the accommodation prices starting at £330 per night to stay (which you would normally associate with much grander hotels) gave an impression of the venue boasting more than it offers.  However, fresh ingredients you will get here and a couple of pleasing moments were had.

The entrance to The Albannach leads straight in to an attractive looking conservatory to peruse the menu and have snacks prior to the meal.  For my visit, the snacks were Spiney (a type of langoustine which was good but not as sweet as that served in Umu), Iberico ham with grapefruit on toast (lovely crunch from toast, good quality iberico ham and kick from the grapefruit) and a quail’s egg with caviar on puff which came across under-seasoned and a touch bland.

Home-made bread came with black olive and thyme and as normal sour dough breads.  I found the latter very doughy and so much so it was almost still wet; this was not good.  There was better flavour from the black olive bread which was very good and the butter was very well done.

The lobster was beautifully soft and unspoilt, save for a glaze of butter (which enhanced it) and the garden salad gave it freshness, but was  unfortunate to have a piece of shell in my first mouthful of lobster which marred the experience.  Pan fried Guinea Fowl with roasted shallot, caraway croft cabbage, organic Scottish cider sauce was absolutely juicy, with lovely sweet cider sauce and hints of liquorice. Very pleasant, rich sauce and was essentially a nice dish.

Wild mushroom tart with salty fingers had a lovely crunch to the salty fingers, powerful mushroom flavour, simple and was almost on its way to the Sportsman level of ingredient restraint but not as victorious.  Next came the butter poached wild halibut, sea purslane, charred fennel which showed fish as fresh as they come and was perfectly succulent.  The asparagus however, was a bit of a mission to simply cut through at that thickness, especially with a blunt fish knife.  However, the absolute star was the champagne sauce with a lovely delayed kick.  When all was combined, the sauce seemed to disappear so this dish could have done with more here to keep bringing it together.  I have no doubt that this dish could have been elevated with more sauce on offer in a mini boat on the side and peeled asparagus.

Westray wife Orkney, and Taleggio cheeses (Italian) were served with home-made oat cake. Good portion control here and both were pleasant but somewhat plain.  One thing that stood out for me was the fact that both cheeses were on top of each other was surprising as this means that the flavours become mixed and would have been better if they were served with space between them.

After a few ups and downs through the meal, the hot citrus soufflé with butter chocolate ice-cream was a triumph and a lovely to have.  Brambles (blackberries) gave a nicely balanced sharpness to a perfectly cooked soufflé, light to the core.  The bitter chocolate was wonderful (not too powerful but had depth as well with a twist of acid from the blackberries done to just the right level).

Whilst I appreciate this is a husband and wife team working passionately with presumably more expensive utility overheads than other parts of the land, I felt the lack of any menu prices until the end and the steep costs of the accommodation almost gave an impression that the diner should be feel lucky to be there.  It was also a hefty initial wait at the start.  I arrived early, but it was just over an hour after my booking time that I was actually sat at the table with my first course which is not what one expects at a Michelin starred restaurant, particularly for one with only one / no choice menu.

Service from the front of house became more estranged as the evening went along and it reminded me of my first enquiry I made just before Christmas in 2016, where the owner was audibly frustrated at my phone call to make a booking as it interrupted her holiday chores; something that might not be too out of place in an episode of Fawlty Towers.

There were some nice food moments at The Albannach and there is quality to be had here, particularly with the fresh produce, but nothing that stood out as a must for me to sprint back to.  I thought long and hard about the food grade for here and the 65 mark was as high as I could go based on all other restaurants to date and taking in to account the highs and lows of each course of this visit. 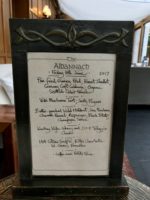 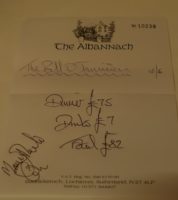 The dinner bill for 1 with one drink and coffee

Bottom-tier starred restaurant based on design and flavours.
Service finesse.
Inflated charges of the hotel.