(Editor’s note: review written at the time of establishment holding 1 Michelin star.  There are various articles and reports of Boath House ‘handing back’ their star as at 2018 but Michelin confirm time and time again that this is not within any restaurants’ remit and is Michelin’s decision alone).

This is the second most northerly Michelin starred restaurant in Scotland placed in the town of Nairn and on approaching via its own driveway, it appears more like a Lord’s manor than a restaurant. Inside, although the rooms have high ceilings and the entrance felt a little museum-esque the welcome was warm and immediate.  The restaurant is placed at the rear overlooking the lake that the building resides next to which is very pleasant but I could not put this on the same level of Kinloch Lodge or Isle of Eriska for unadulterated charm. Food wise the menu was very good value at £30 for the lunch with pleasant snacks in the open and bright lounge but I had issues with some textures and flavours.  The quality was not in question and this is a very good place to go for upping the stakes for a meal, but the final impact was subdued.

A rather lovely squid ink crisp with chili jam and a croquette of yoghurt curd and lamb kicked off things in the sitting room whilst selecting the courses and these took the sting out of being in quite a huge waiting room. The restaurant itself is modern and stylish in design. I’m not sure why restaurants decide to place tables so close together when there are only two tables occupied, especially if one of those tables only have one person at them (me) as this can make the other table feel uncomfortable as if they are being eavesdropped on – something I have utterly no interest in doing and is the height of loser-ville-ness to do, but can’t blame people of being wary about. Giving both tables a view of the lake was probably in the equation (although the other table was further away from the window) – however, it is a minor point that I must remember to put my foot down on a bit more in future to avoid.

The bread was flavoured with molasses – a type of syrup – which has a spicy and almost festive taste but was frankly a bit strong, sour and unpleasant for me as was almost like having to eat a rich and dark-sugared cake before my meal.  The salmon starter was as fresh as they come appearing as it was literally pulled from the river moments before and sliced on to the plate, but I simply didn’t like this dish. The flesh was clearly tender but too sludgy in texture for me to enjoy particularly when the skin was likewise raw and impossible to cut in its slimy, rubbery-ness. Eating it was like chewing on thin gristle and I should have obeyed my instincts on this and left it off – but that would not be doing what chef intended so I plodded on, but this certainly was not my cup of roe.

However, thankfully the main course of a different kind of Roe in the form of deer was superb. The lapsing sushing tea and liquorice jus was a stroke of genius with glorious flavours of the supporting artichoke puree and confit salsify which all, with the equally interesting Japanese artichoke (crone) made a concert of textures with flavours as well. The rice pudding was a well-executed dessert in its creaminess with supporting balance of cinnamon and clever mango gel made to look like an slice of mango. This was basically comforting as a finish.

The £30 price tag without wine for this lunch was exceedingly good value and that was perhaps where the real return was for this visit. It was simply a shame that I was minor in a state of revulsion at the starter. This has knocked my overall grade a fair bit but the overall presentation and care gone in to the design was obvious to see. 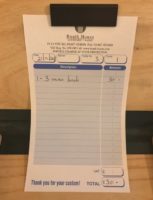