When I first read about this restaurant it was labelled online as ‘The Box Tree Inn’ giving the impression it was a pub.  Don’t be fooled if you see the same as it is most certainly is not a pub and jackets and smart trousers seem to be more appropriate choice when dining here (which thankfully I went safe on).

Without much time I opted for the set menu lunch at £35 for 3 courses which is more expensive than the norm in terms of Michelin starred set lunch menus, but I suspect the interior and staffing levels may be the reason of more overheads.  Pleasant canapés including a mustard macaroon and truffle mayonnaise were served in the bar waiting lounge whilst perusing the menus which were an extremely good opening.  Overall the feel of this restaurant was one of elegance, ideally suited for Valentine’s Day, but with the food not quite backing up the confidence of the service.

In terms of the menu itself, I thought the starter of salmon with tarragon and caper mayonnaise was absolutely delicious.  A really nice combination I thought (not had salmon with tarragon before) and nice to see on the set menu but there was quite a strong punch of salt on this dish and anymore would have made it untenable.  If I could have had one more thing it would have been slightly more caper mayonnaise as the small blobs had to be sparingly spread throughout and was gorgeous in itself.

The main of pork was stylishly designed as one would expect at this level with melt in the mouth pork but two surprises were just how sticky the jus was which I thought could be toned down a little and the obvious smudge in the presentation.  The latter point is not the end of the world of course and to the local eateries the design of this dish is clearly in a league above however, this would actually be unforgivable in many 2 and certainly 3 Michelin starred venues which is one of the big differences between the types.  The soufflé was one of the lightest I have had with gentle treatment of the blackberry and a pleasant hazelnut ice cream – no issues and plain, pleasant stuff.

Overall, this was a stylishly designed meal which exposed a couple of surprises for me which I would normally not expect at a 1 Michelin starred venue but the front of house was very warm and hospitable and the elegance of the place is not in question at all.  There is actually one of the nicest tables in the front dining room opposite a log fire which, if wanted for Valentine’s day I imagine the earliest booking would be somewhere nearer 2020 owing to how nice this was (and I gather is much sought after to be specifically booked on normal Saturday nights).

My one gripe and critical observation with this venue is that I definitely got the sense that the majority of the staff were a little too aware of the venue’s status and although attentive, I struggled to see many of the staff smile with diners very much.  My verdict on this is that The Box Tree is a fine place indeed but could afford to take itself less seriously and would benefit from a more jolly (rather than too serious) rapport.

Certainly some pleasant food provided here and the general elegance of the venue makes it a must for more notable occasions. 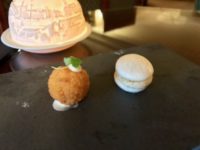 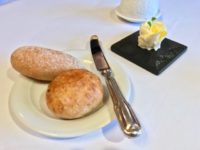 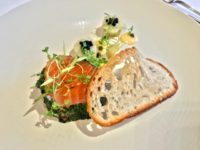 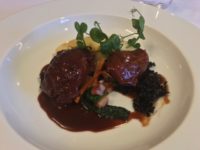 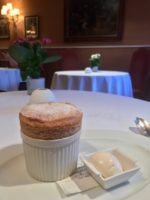 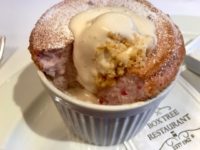 With vanilla ice cream melting within 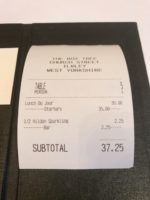