The third Marcus Wareing venue within London sporting an alluring side bar and set in a high ceiling, grand forum next to St Pancras station - comforting food

I’ve been meaning to drop in to The Gilbert Scott for many moons now as recommended by Marcus Wareing’s team at Tredwell’s, and a chance pass by on Saturday early evening allowed me to drop in quickly.  The bar was impressive, the staff with beaming smiles which is always a good sign and I was accommodated for the brief visit.  First impressions of the dining room were grand, resembling that of The Wolseley but only smaller.  If you enter the hotel’s front doors you are on a bit of a hike to get to the bar so my advice is to enter from the west (bar entrance) and pass the front of the hotel as you will be able to go straight in from the street.

As I was in a rush I couldn’t stay for dessert, but opted for two starters and two sides with a glass of red.  The tiger prawn dish was certainly light with a clear sauce and pleasant pasta but only raised a half smile.  The side of paprika chips were extremely good as these were far more interesting than the norm and not too heavily spiced, unlike the mash which I did think was under seasoned – I had to put four grinds of the salt dispenser to make it less bland.  However, the star of the show was the pig’s head, fried and coated in breadcrumbs with gribiche sauce (similar to that of remoulade sauce) on the side with an even sweeter, viscious salad dressing on the endive leaves.  All of these on the pig’s head dish were utterly wonderful and certainly gave the pig’s head at Arbutus and pig’s trotter at Social Eating House a run for their money! In fact, if pressed, I would actually say The Gilbert Scott version would be top of the class on these pig’s head dishes.  I will be happy to rectify not having enough time for dessert whenever I visit next.

All in all a lovely place to drop in to with a unique look and certainly elegant design.  My only reservation being that in spite of it wishing a relaxed feel, I don’t think it can be classed as truly casual as it seemed to befit formality and possibly business occasions, in or on the way out of St Pancras, rather than making a special journey for (you will still need to walk well outside the station to get to it).  That said, I thought it was a beautifully done venue with some very decent moments of food in an oppulent setting served by staff who clearly knew their business.  A rather echoey, but refined setting and if I’m ever getting the train to Paris, this will be perfect to meet at prior to the journey. 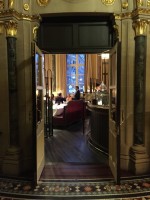 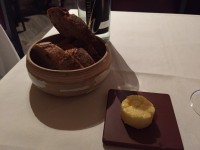 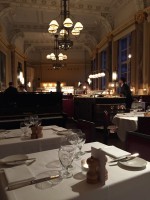 The Gilbert Scott from the front corner 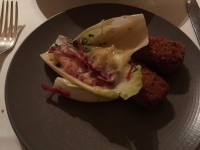 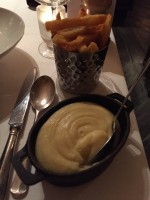 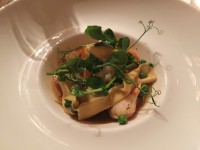 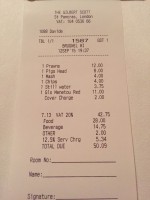