A third visit to this marvellously cosy, English Inn that has retained its Michelin star for yet another year having gained this and held since 2008.  Each time I have come here there has been a delightful mix of locals at the bar and those coming in to try its finer dining in the restaurant which is split between a lighter purpose-built Annex and the cosier, log fireplace front room.  The classic cooking was ever pleasant to receive with only one moment that was slightly under par on this visit. but essentially still the same lovely balance of homeliness and sense of outing.  The menu is still one of the most reasonably priced menus you can find at Michelin starred level in the country, another reason to put it on your hit list.

The very first thing offered at the table was leek and potato soup with leek & chive oil served in a little teacup as is their signature style and this was extremely good.  Totally in keeping with the season, it was also exactly what the doctor ordered from coming in from the cold (served reassuringly hot as well).

Starters included chicken liver parfait, salmon and a pork and venison terrine.  The liver parfait was immaculate. Not only was it gorgeously smooth, but the liver flavour also packed its punch and the fig and apple chutney was a very well balanced additive with virtually faultless hand made toasted brioche to accompany.

The smoked Loch Duart salmon with cucumber, horseradish, seaweed crisp and Avruga caviar was a classic combination this was treated well with a pleasant seaweed crisp to add texture to the dish.  Pork, venison, black pudding and pistachio terrine with mushroom duxelle, spiced prune and pickled onion salad was a very good dish.  The combination of the black pudding and other elements was very agreeable and the presentation was simple and elegant.

Risotto of wild mushrooms with fricassee of wild mushrooms, mascarpone, aged parmesan and black truffle was one of the four mains. This had a good stock and pleasingly warm and creamy feel thanks to the mascarpone.  A pleasing addition to the Autumn menu.  Cornish crab ravioli which is a starter was had as a main and was served as two, large raviolo with lemongrass, crab bisque and fennel fondue.  My dining companion (a prolific consumer of fish and pasta) sadly did not enjoy this version, as well as others, owing to the filling being a little too packed and the crab being relatively indistinct.  It’s a fine line on how thick the pasta should ultimately be in relation to contents however, there are simply more delicate versions of raviolo experienced and although a harsh comparison, this observation comes from how it can be more delicate at Restaurant Gordon Ramsay for example.

Jambonette (stuffed poultry leg) of Cotswold white chicken with Autumn truffle puree, hasselback potato and poultry jus was hearty and nicely done.  The chicken was succulent with a wonderful boost of the truffle puree and the chicken skin shards in some of the thinly cut hasselback potato was a masterstroke.  All ‘washed down’ with a reassuringly fullsome jus.  Torte of braised lamb shoulder, potato and confit onion with lamb cannon (rolled saddle from the loin) was served with curd and cavolo nero, roasted onion bagna cauda (traditional garlic and anchovy dip).  This was another good main and the lamb being well cooked with complimentary add ons including the curd.

All in all, the bill came to £190 for 4 with half a bottle of chablis at £25 which worked out as £47.5 per head for an average of three courses, splash of wine (no desserts), teas, coffees and petit fours which is very good value for money.  I also like the fact that there is a bar menu at The Nut Tree Inn and coming in from the cold to having a pint and Michelin starred snacks is probably one of the most wonderful options this country has and I am pleased to enjoy from time to time.  If you haven’t done this in a while, I would obviously recommend doing so. 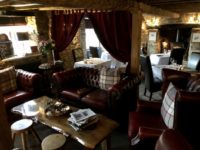 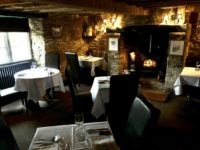 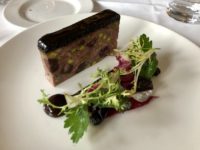 Terrine of pork and venison 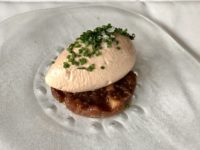 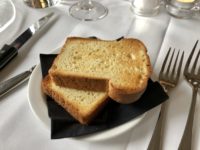 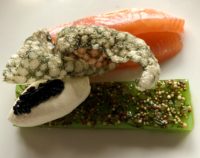 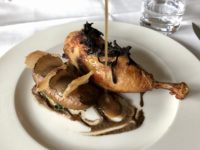 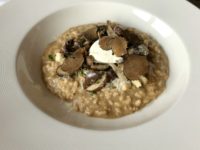 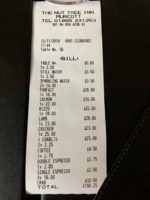 The lunch bill for 4 with small drinks

My second visit to this Michelin starred pub in Oxfordshire.  It was good to revisit as it was as the first visit showed good cooking and a welcome lack of unnecessary fanfare.  This visit was an evening supper and showed a further pleasant array of simple dishes done well.  The pub is also a handy stone throw away from Bicester village shopping outlet, so a visit here can easily be combined with a shopping spree should a car park space actually be possible.

The meal began with popcorn with cep powder.  These were salty and very good.  Homemade breads made that afternoon included focaccia with Rosemary, baguettes which had a decent crunch and sourdough that had a good crust.  An amuse-bouche of white onion soup was served with chive oil and was a very appealing greeting to get warmed up and comfortable.

I elected for two starters and a side as the things I most wanted to try.  The Salmon starter was quite dense with dill that was quite salty and was offset by the horseradish cream.  I felt this could have done with more of the latter, but it was very good to have the caviar and represented good value for money as a starter with this kind of indulgent ingredient.

The haddock starter was served as a gratin with layered potato slices, a soft poached Haddenham hen’s egg and with a chorizo and tomato compote.  This was a bit of a mission to eat from the ramekin it was served in but had a very pleasant, smokey quality and the chorizo worked like a charm.  Whilst quite straight forward, the parts all worked really well together I thought on this.

I opted for a side of thick-cut chips which were customarily fluffy on the inside being triple cooked and well crunchy on the outside. Béarnaise was a generous side and very tangy result from fresh shallot, white wine vinegar and provided a very lovely add on.

As that was all actually quite filling, it made no sense going for a dessert so coffee and green tea with very nicely done ganache truffles at the end provided the petit fours.  The whole bill for dinner and being completely full came to £31 including a pint of beer.  This is extraordinary value and rivals that of The Crown in Burchett’s Green at £28 for a 5-course supper I had at that Michelin starred pub last year.

There is no wonder why I think the world of pubs that do very good food and they are a national treasure to keep. Long may this one keep it up.

Having finished a spontaneous shopping spree in Bicester Village I was feeling peckish and a radius check of the area alerted me to the Michelin starred Nut Tree Inn only being a 10-minute drive away!  A lucky, spare table existed revealing three options: an a la carte averaging £50 for 3 courses, a tasting menu for £60 or classics such as battered fish and chips for approximately £12.  As I had time on my hands and not sure how long it would be until my next visit, the tasting menu was a no brainer and this turned out to be simple and enjoyable. Definitely more than just a pub, this is a good spot and is to be done again when possible.

This proved to be a winning choice as the tasting menu proved to be magnificent value for money with 9 courses for approximately £10 more than how much the a la carte would have been.  The stand out dishes of the menu for me were the turbot with superb garlic and cream sauce and the melt in the mouth pork belly with celeriac puree, apple sauce and pork reduction.  These moments confirmed being very happy to have gone for the tasting option.

Another lovely moment was the wonderfully and subtly pickled shallots to go with the Pea Royale and goat’s curd, which formed a lovely combination altogether, and this was needed to cut through quite a dense, chilled pea blend.  There were no real low moments of the meal save to say that it was all at a consistently mid-pleasing note.  I think I will always find, however, passion fruit in sorbet or soufflé form an assault on the jaw bone and teeth.

The only other aspect I would have preferred is if the portion sizes were slightly smaller on the tasting menu – it was utterly fabulous value for money as a result but as most of the courses were sized as a mid-large starter, I was almost fearing the next course rather than bouncing with excitement.  I would recommend making sure you go hungry.

This is a lovely pub no question and the owners and staff were genuinely enjoying looking after their guests which were easy to spot and made for a good atmosphere.  The hospitality was very homely for all those present, who ranged from long-standing locals to blazer wearing folk clearly wanting a more notable dinner.  A very nice find and marker for the future as well. 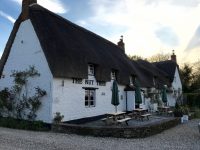 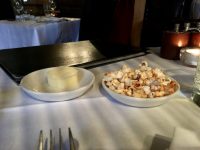 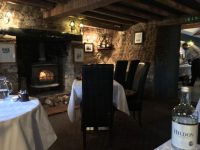 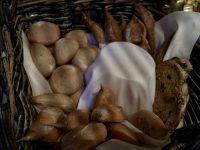 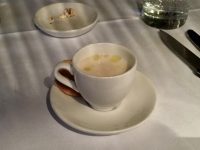 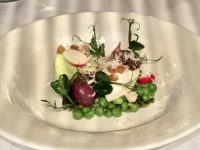 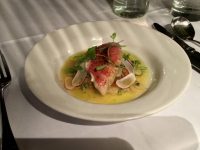 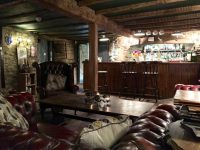 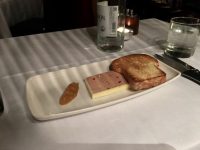 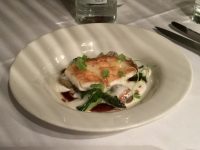 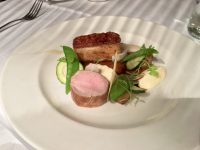 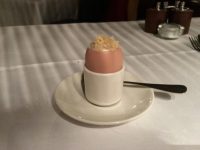 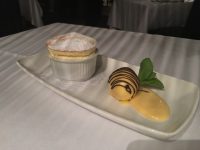 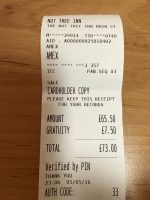 Bloated at the end of the tasting menu.