Quality food from James Lowe served in an informal setting

My second visit to Lyles which was exceedingly welcome after my first time.  Thankfully, the headline for this visit is that it was a super show all round.  The glasses of rosé that were recommended were the nicest I think I have ever had and all the food was in the same, minimalist and powerful league as I remember it.  A superb venue which is now one of my top recommendations in London.

I refrained from the shellfish but the eal starter was simply one of a kind (so fresh and delightfully balanced in flavour) and I think the highlight of the meal and beyond anything from my first visit.  I enjoyed my mushrooms with egg a great deal.  My second starter of grouse with liver parfait on toast was a very pleasing variation on for ths game and on trying the flank of beef, this was superbly tender and served with a beautifully judged amchovy sauce.  I found my blackcurrant dessert quite sharp but overall nicely done and I the found the fig dessert simple and very agreeable.

The service was a pleasant mix of being attentive, knoweldgeable and in a casual style at the same time, although I’m not sure listening to “Danger Zone” from the soundtrack of Top Gun and other upbeat songs were very good background music for this restaurant, even if the interior lends itself to a more informal setting.  However, overall this was a fine meal indeed and makes two out of two virtual knock out meals had a Lyles. 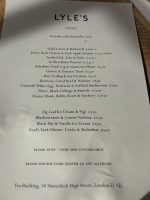 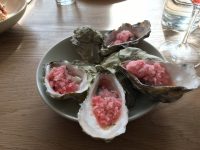 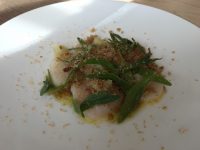 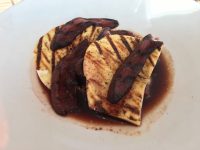 Beef steak with mushroom and egg 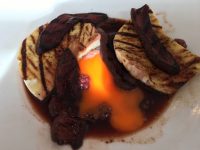 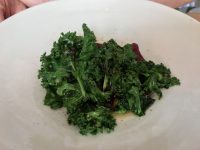 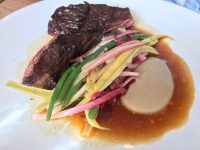 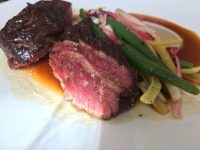 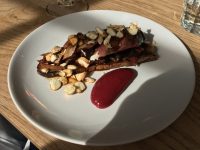 Grouse on toast with damson sauce 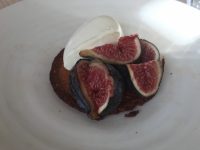 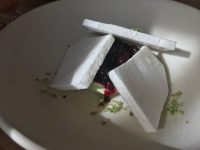 I was very impressed with the food at Lyles on this first visit and I can see why it is very popular.  It has the look and feel of an upmarket cafe but, in a similar style to The Clove Club (just around the corner in Shoreditch) guests will happily get dressed up for a more notable occasion here now it has a newly awarded Michelin star (at time of writing).   I thought the fact that the tap water was filtered and then given a CO2 kick to make sparkling or simply chilled for tap water was an especially nice touch and the sour dough made on site along with the home made butter were both great – the deep, yellow glow for the salted butter was reassuringly lovely.

The blood cake (black pudding) here with burnt apple reduction was simple and extremely good with the fennel that provided the perfect crunch to add texture whilst complimenting the flavours nicely and I thought the dexter beef (which was perfectly tender) was absolutely beautiful with the accompanying celeriac puree (also completely knock out as a puree and pairing).  Such a simple dish but so powerful and enjoyable that I found it difficult to see how this could be improved.  The dessert was good but not as strong as the savouries – still very pleasant though with a perfectly textured and sweetened treacle and a calmer, less sweet milk ice cream to provide the balance.

I really enjoyed the food here and I could not help think of The Clove Club and a sprinkling of The Sportsman as well in its style.  Although the choices of menu are restricted I thought the value for money for the £36 for this lunch was a fair package and I was just about full on leaving.  The service was welcoming and enjoyed a more informal style, which suited the look and feel of the restaurant but did seem like it was having to catch up on occasion.  I would say Lyles is perfect for casual occasions as its forte.  In terms of the food, I thought the simplicity and flavours combined made for dishes that were really first-rate and am very happy to grade accordingly. 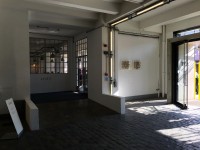 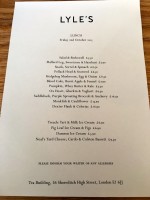 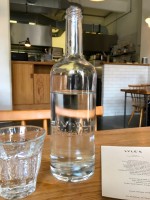 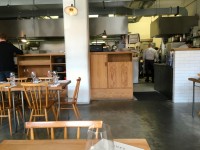 Lyles from my table 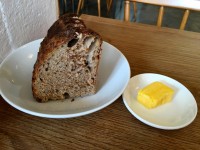 Home made sour dough and butter 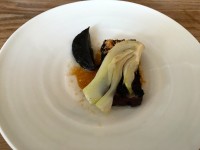 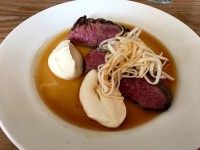 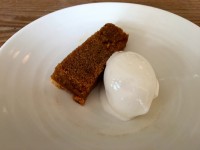 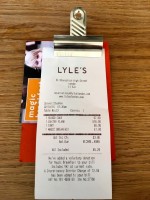 Only one menu choice for dinner.
Slightly stretched service.