The Muddler’s Club is the latest addition to Northern Ireland’s Michelin starred family in the 2021.  It joins Ox and EIPIC as Northern Ireland’s other Michelin starred restaurants, all of which are in Belfast.  The 7-course tasting menu only option at £65 was reasonably priced and with good return on the flavours including a knockout piece of lamb within the mix.  I enjoyed this menu and with the very accommodating hospitality, the overall experience was a very enjoyable one and this venue would seem to provide well for any occasion.

The Muddler’s Club opened approximately 5 years ago with its current head chef (Gareth McCaughey), taking over in 2019.  Chef Gareth had moved over from Ox where he was Sous Chef.  Recent restrictions in Northern Ireland have wreaked havoc on restaurant probably more so than England, Wales and Scotland and I think my flights and booking had to be moved three times in total, but the team were in constant touch, going to every length to provide as many solutions as possible and perseverance won the day.  At time of writing, flying from London to Belfast did/does not require any PCR tests from England/UK or requires the need for a passport and is thankfully as if getting on a train from one part of the country to the other. Belfast City Centre is an approx. 15 mins journey by the shuttle bus from Belfast City Airport (BHD) and was £2.50 for this journey – easy as pie.

Snacks came in the form of two canapes.  Smoked eel with apple and cucumber on top of a crisp made from black rice was absolutely sumptuous.  The gentle smokiness of the eel was excellent and complimented well by the acidity within the gel.  Ham hock coated in panko breadcrumbs sat on an artichoke crisp with a layer of soft, Irish Coolattin cheese and a thin slice of truffle on top.  This was a pleasant hit of umami although I found too big for one bite and a little precarious to hold, so scaled slightly down in size might make this more refined but was pleasant enough.

Heritage tomato with burrata cheese and basil was the first course.  The light shards of thin toast were a welcome bit of texture to this classic combination in what was a fairly simple dish in comparison to the tomato dish of very similar elements had recently at SOLA for example.  A harmless dish with reasonable tomatoes, but I’d have to say not strong enough to be showcased in this manner.

However, what was received well by the whole table was rabbit with a prawn bisque, prawn foam on top, carrot puree and lovage oil.  The rabbit was succulent and thankfully a good portion size on the plate (rabbit has very little yield on average) but the masterstroke here was the addition of apricot within the mix to combine with the sweetness of the carrot puree.  A very enjoyable dish indeed.

Lamb, (Mourne variety) was supplied by Jason Hamilton and his eponymous Cranbrooke company.  The lamb was sensational in flavour and the supporting elements of leek, smoked artichoke, wild asparagus and ponzu gel were fine and worked very well, but it was the sheer power of flavour of the lamb that was notably one of the best lamb moments in recent times which was also thankfully not drowned out by the other elements.  Its skin was wonderfully crisp too.

Next a succulent piece of cod came with spring vegetables, a thin layer of chicken skin on top, fennel and a luxurious beurre blanc sauce, laced with cod roe for seasoning and as always, its pleasing, popping texture to the sauce. There was a pleasant and strong aroma of dill from the dill powder to assist and the dish was hoovered down quite comfortably.

Salt-aged fillet of beef from (Peter) Hannan Meats suppliers was served with girolle mushrooms, cauliflower, summer truffle, miso, bone marrow and summer turnip discs.  Whilst this had enjoyable flavour combinations (with a well-picked glass of Syrian red by the Sommelier), the salt-aging had obviously made the feel of the beef quite flaky and stringy as a result which seemed a little bit of a shame to what fillet prizes itself on in terms of texture, but this is mainly personal preference.  This version of beef by its nature is quite dry and I would have liked to have more ‘wet’ jus to accommodate as the miso paste was also quite cloying in the mouth as the main accompaniment.

Two sweets were included.  The first was a pre-dessert of strawberry, elderflower and champagne which was light and very welcome and this was followed by a magnificent chocolate and coffee dessert.  The chocolate pieces were silky smooth and a delight; the malt ice cream and malt shards were a touch of genius as this was a simple and delectable together.  Unbelievably the photo of this did not turn out well and is the only dish not pictured however, please take my word for it that this was simple dynamite. This is the sort of dessert you would want to eat and a joy to finish on.  Coffee was Nespresso, used as a control measure and thankfully was reasonably priced at the same time.

I liked this meal overall as it did not complicate unnecessarily and had enjoyable dishes with a couple of high moments within.  The staff could not have been more accommodating and welcoming and the atmosphere lends itself well to a good occasion; little wonder it continues to be booked out for weeks. 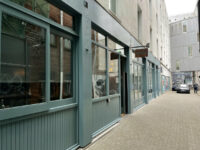 The bill for 3 with drinks