A very welcome return to (now) Gordon Ramsay’s Petrus in a beautiful Knightsbridge enclave (that also holds Amaya).  Petrus has held its Michelin star since my last visit in 2011 and been long regarded as one of London’s finest.  Unlike many of London’s Michelin starred venues, Petrus is also open on Sundays for lunch and this was a visit for just that, to try the set menu lunch for £37.50 for three courses (with extras this turned out to be six).  The quality of this lunch was extremely good and far more sophisticated than most starred venues.  For foie gras enthusiasts, the version here with white chocolate and balsamic glaze was wonderful and this lunch overall was a superb advert to revitalise interest in coming back well before I’ve completed the newly promoted Michelin starred venues of the UK, it was that good in parts.  Well recommended for virtually any occasion, particularly  special ones.

Snacks arrived in the form of mini bites of cod with curry mayonnaise and coriander and an onion brioche bite with truffle and chive, both of which were very good to have.  The breads included lapsing souchong sour dough which had feint flavour and is not made on site but the restaurant was proud that the bakery does not provide for any other restaurant.  It was pleasant but similarly it was quite a mission to get through the thick and tough crust but was made considerably more doable by the perfectly soft Normandy butter with its almost whipped texture.

The amuse bouche of Jerusalem artichoke velouté with artichoke crisps was absolutely great; soft, creamy and enticing, just what you need for an amuse bouche.  The starter of foie gras parfait, green beans, mustard, almonds was glazed with white chocolate and balsamic vinegar with Walnuts and grapes.  The interesting thing I found was that this was seemingly a signature dish on the a la carte but was also available on the set lunch menu which was another lovely touch to see for the value of the menu.  The roasted sour dough was delightful to have with its olive oil glaze and perfection and the smooth parfait itself was gorgeous.  Interesting sweetness and greens have it just the freshness it needed to balance and was a superb dish.  The one criticism was that the sour dough was in very short supply in size to the quantity to the spread of foie and I needed to order to another slice which needed to take several minutes.  Personally I think bringing two of the slices of roasted sour dough pieces with the foie gras would enhance this so that there is no need to pause.

The fresh mushroom linguine with seasonal mushrooms, 36 month old parmesan velouté was certainly an upgrade to exactly the same set menu linguine dish had recently at Galvin la Chapelle  but perhaps this version could have been a touch more substantial for a main course.  A nice touch was the inclusion of an extra add on of white truffle slices from northern Australia no less.  Unlike the strong, earthy flavour of more common truffles from Italy, this was sweet and had an almost fennel / star anise quality.  Each slice was an additional £5, which was not explained brilliantly well, through a thick accent however, the three slices were just enough to make a small difference to the linguine dish and make a fraction richer.

Pre-dessert was lemon curd with watermelon granita and was refreshing with very well done flakes of watermelon and pleasant mix of sweet and citrus.  This was more interesting than most pre-desserts had of late.  This was actually the same for the dessert of milk chocolate crémeux with banana, hazelnut and vanilla ice cream & frangelico foam. The crémeux was like velvet and the lovely banana flavours came through in strength with fun and enjoyable caramelised popcorn.  Although the single espresso was more expensive than the norm at £6, that is Knightsbridge and it gained access to seeing the petit fours which turned out to be white chocolate with champagne truffle jelly and again, summed up the overall standard of this restaurant.

This was a very successful meal all round and was clearly at the top of the 1 Michelin starred family and in terms of flavours, better than a great deal of meals had around the whole spectrum.  This is now logged as a definite place to impress, relax and enjoy whenever and three from three visits is a very good level of consistency.  Service was professional and attentive throughout and a particularly nice touch was that they were reportedly still very happy to do the chocolate sphere dessert on request even when not on the menu which again shows the mark of the place to want to do that for the customer if requested.  Not many places go to the effort of making their set menus stand out as this did and this was impressive in its own right and shows its real skill.  I have no doubt the tasting menu will be interesting here and I have more resolve to do that at Petrus now than most others on the current hit list.  Enough said; a great place and a very, very safe bet to try – put it on your list if you need any direction!

The lunch bill for 1 (no drinks)

Another superb lunch and gained thumbs up and smiles from all three of us on this visit.  I had no problem recommending this place for the foodie companions I was with and they were very happy with the food and the spiral drum wine cellar in the centre of the restaurant which we were taken in to at the end of the meal. 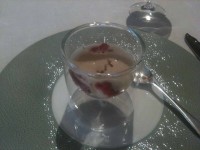 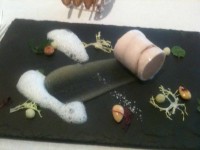 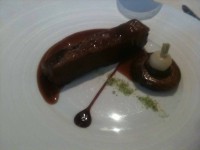 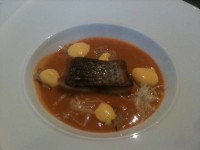 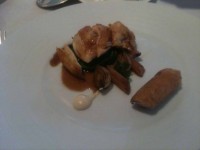 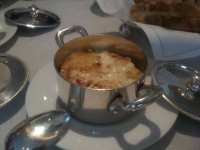 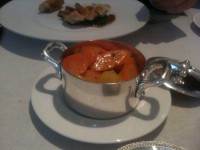 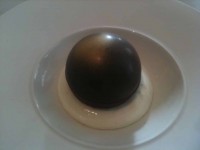 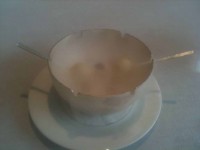 The past bad blood between Marcus Wareing and his original mentor Gordon Ramsay is well known and after the chopping and changing it is nice to see all of that settled with Marcus truly established at The Berkley and the Ramsay conglomerate re-shaping Petrus back to a pleasant 1 Michelin starred option in Knightsbridge.  The interior is swish although I would only feel more comfortable in better attire as opposed to casual wear as that definitely feels like the more appropriate move to make here.  The dishes have all been very good and its very positive point is the set menu, which is not only reasonable for lunch but also has genuinely lovely dishes.  The amuse bouche was lovely and the chocolate sphere with milk mouse desert was frankly so good I had to go back to go with a work mate simply just to show that dessert which was truly sumptuous. 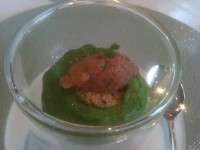 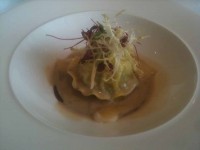 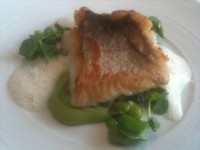 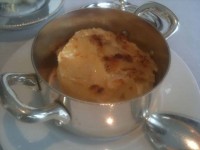 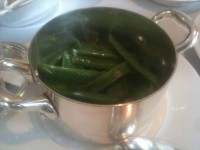 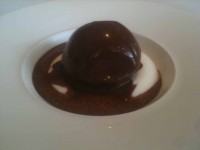 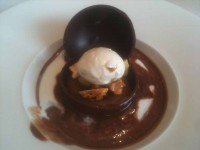 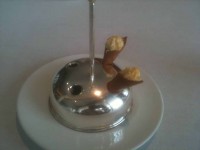 
Formal feel may put some off but should be tried regardless.