A second visit to restaurant Sat Bains after quite a long absence and was good to get back to see it from the normal restaurant side.  Once again the service was exceedingly warm and professional and the menu appeared to be the same formula for creativity.   Overall it was a collection of delicate dishes but I sensed that the £140 for the higher tier tasting menu and one glass of wine would have been more acceptable to someone new to this format of food.  Price aside, the meal produced a steady stream of enjoyable dishes but sadly none of which reached firework level.  Desserts were very good and for me, was the period that, on balance, reminded me of its place within the 2 Michelin star family.  Still recommended for a notable occasion and once away from the motorway roundabouts and underpass, it is a hidden sanctum for food and restaurant enthusiasts.

We were placed in the conservatory part of the restaurant and whilst this feels a little cramped in comparison to Le Manoir, it was still visually pleasing.  Snacks took the form of a thin pastry cigar with the garden herbs with a lovage emulsion and a mini cone with horseradish ice cream.  I thought both of these were utterly light and lovely, epsecially the perfectly balanced horseradish ice cream and the refined nature of the cigar.  I believe Esperanto in Stockholm uses exactly the same formula for their dried celeriac cigar with herbs inside so it is difficult to say who inspired who, but the result was a delicate and lovely way to begin this visit, the opening nibbles being one of the highlights of the meal on reflection.

Breads took the form of south rough, black treacle and bread crisps with cultured butter.  The light, bread-crisps were a particular highlight here with butter that was pleasing but just a little (and I very rarely say this) over salty for me.

The raw scallop was even more of a treat than the cooked and with the strawberries gave a genuinely pleasing sensation.  We were both a little less keen on the dry-iced chicken with chicken skin.  Normally, the latter makes virtually anything explode for me, but on this occasion I couldn’t see how freezing the chicken gave anything more than an original way to serve; it seemed to lack flavour and as the iced chicken thawed in the mouth, it with was almost unpleasant.  The semi-crushed potato with cream and caviar however, restored a sense of relief and was a simple and very pleasing dish.

The beef tartare unfortunatley felt somewhat gloopy with the use of so many mushrooms and the thickness of the slices and I prefered the restrained and finer use of mushrooms in steak tartares at Adams in Birmingham and Isle of Eriska.  The pestle and mortar used at the table for all the garden herbs with olive oil was a nice piece of theatre and was powerful in flavour to go with the ‘tagliatelle’ that was actually long shavings of kohlrabi.  The only draw back of this dish was that it was so lifelike to tagliatelle that we both forgot what it was and the crunch of the kohlrabi was initially a negative surprise(!).  Once adjusted, the combination of the cheese and the garden pesto was clear as a bell and full marks on originality for this dish.

The turbot was a success, plain and simple and with the shallot puree, was another highlight of the meal.  The cheese within sweet pastry and apple sticks was new but a little too busy for the cheese return; if there was one dish that the phrase less is more was applicable to, it was this one.  The cross over of savoury fudge was clever and as a literal nibble, was over in a couple of seconds.  I don’t think any pre-dessert can easily beat Daniel Clifford’s pousse café at Midsummer House but it was a fun change.

The opening chocolate dessert was a pleasant level of decadence but the real stars emerged in the form of the clever milk cracker dessert (genuinely the flavour of milk in the form of a cracker crisp) and the Thai curry ice cream.  This latter was marvellous.  Hiding inside the candy floss as an impressive treat, the gentle heat from the chilli in the ice cream was tempered superbly by its wonderful, creaminess and textural smoothness.  Although I have had Thai green curry in dessert at one other place before (Paris House), this was a highly original and absolutely A-grade dessert.

Petit fours were very much the same style as had 5 years ago (thin, wafer shards of chocolate with stomach-calming ingredients, embeded in a log).  Flavours on this visit included green tea, caramel with pepper, rosehip fennel and chai spices, all of which proving a light and better way to finish a long meal.

In summary, the meticulous nature of the dishes here is evident.  Whilst we left with what felt to be an anti-climax, overall there is no question of the levels of skill which were good to see.  I sense the evident popularity of the restaurant will be keeping the turnovers healthy, but I feel my two visits have now gained the majority of what can be gained from the venue and the current rate of visiting once every 5 years does not need to be exceeded. 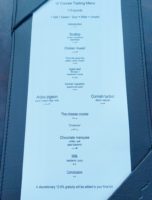 Potato with caviar and cream

Turbot with shallot puree and allium

Milk dessert with yuzu and raspberry

Nice touch for the bill

This was a lucky visit as on this occasion there was no one else having lunch on the Saturday we went and as a result we got seated at the chef’s counter dining table overlooking the kitchen walkway and prep area and was personally handed the dishes by Sat Bains who took us through the journey.  There were real moments of class in this meal which stood out – namely the pea and egg starter, the bacon, cream and potato substitute that was prepared for me (in lieu of not being able to have shell fish) and the powder strawberry and cream reduction.  These were great.  Sadly I struggled to remember what the other dishes were when writing and that is the first give away as to their reduced impact on the day.  There was absolutely no question of the skill and care involved in all these other dishes and the meal was perfectly paced and balanced as a journey and I should say that the petits fours had in the lounge were impressive.  It was a thoroughly good experience overall – I wouldn’t place it close to my heart in terms of memory, but equally it was certainly not a regret or let down and a very good one to get crossed off the reveared 2 star list. 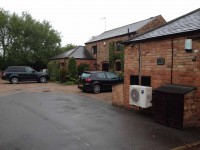 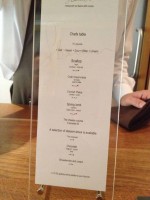 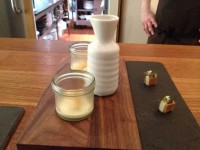 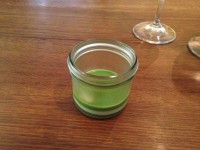 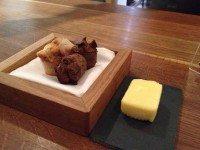 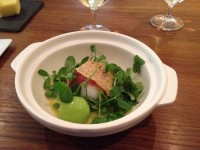 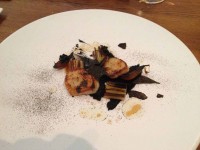 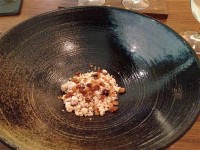 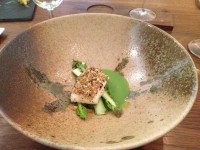 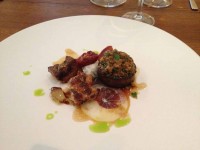 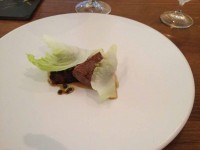 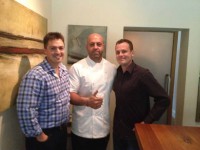 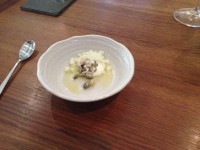 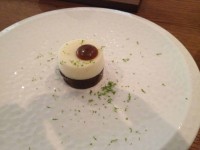 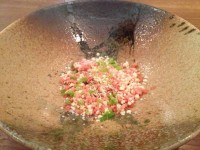 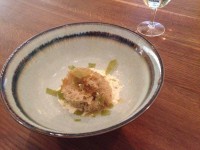 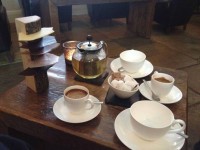