Charming, Michelin starred pub in Chinnor, Oxfordshire set within in a picturesque grounds

My second visit to this extremely pleasant Michelin starred pub in Channock showing its class again as an alluring and elegant pub.  It’s clear to me now that it is highly suited for dinner inside after having a drink by the fire first and is ideal for lunches in the sun outside as well.  I’ve yet to have the latter but, having been able to have this second visit in the summer, I was able to see just how good the pub was in this way in full daylight.  Service was attentive throughout and the set menu options in the evening continuing to prove why this is a good option when the food was at the pleasing level it was.  Certainly recommended if you are travelling nearby and I look forward to trying at lunch when I can.

Two of us shared the offerings made today.  Pork paté bites were enjoyed in the bar by the fire perusing the menu and all options were looking good.  The focaccia bread was again highly decent as an option.  Orkney scallops and glazed chicken wing with cider and shallot with verjus dressing was well done with enough punch from the combination whilst the Brixham crab was nicely presented and perfectly ok.  I opted for another starter in the form of the roasted foie gras served with pineapple which I have not had before and with the spiced brioche made me feel I was in safe hands again – not much to tip the balance in to greatness, but not anything at the same time to be risky in a bad way.

The guinea fowl with carrot and spelt was pleasing and again, nothing to be unhappy about.  Sides were opted for – spring beans and triple cooked chips as good options for £4 each and it was especially good of the staff to oblige a small portion of sauce hollandaise to go with the chips – completely excessive of me, but when it is done this well, I would be an idiot to not bother checking.  As it turned out it was fluffy and airy as a version and although over in two seconds as a result, it was very nicely done (thank you to the management for obliging to my OCD on sauce).

We were actually too full for dessert but the chocolate truffle petit fours were customarily pleasant and it rounded of a safe and enjoyable meal once again, in very hospitable hands.  I must get to doing the tasting menu here next time(!).

Pork snacks by the fire with local ale

One of two dining areas

Guinea fowl with carrot and spelt

The dinner bill for 2 with drinks 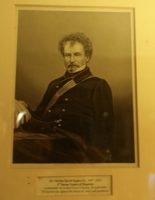 The interior of this pub is humbled and stylish as well as being an evident hit amongst the senior locals of this tucked away, yet oppulent area of Oxfordshire.  The focaccia bread had tingles of that served at The Sportsman and Noble Rot which was nice to try and although the set menu in the evenings from Tues – Thurs resembles outstanding value (2 courses for £19 at dinner time) I selected three starters, being unsure when exactly I might be able to get back next.  As a summary, this is a most alluring pub with a more formal looking dining room for a gastro pub, but one that is entirely pleasant at the same time with some obviously good dishes in the mix as well.

I have been meaning to get here for quite some time now and was lovely to finally get here and see the warm and homely setting inside.  The downside with the winter months is that now we are within pitch black visability from 5pm onwards (as at time of writing).  This obviously prevented me from seeing the gardens of Sir Charles Napier in their full, daylight glory.

For this visit, it was actually the set menu starter of slow cooked duck egg on feta with onion soup that was the absolute start of the show and I think the nicest soup I have ever had.  Such luxurious components and even a fried sliver of onion on the top for texture.  In fact it was so nice, my only niggle with this dish was that as the bowl was quite flat, the surprisingly reduced amount of soup was quite spread out as a result and got cold quite quickly.  However, it was still an explosive flavour all round and the higlight of the visit.

The roasted foie gras was well done and pleasant as a result but simmered at just this level – those had at Restaurant Gordon Ramsay  and Le Gavroche will be exceedingly difficult to beat.  The cheese souffle with smoked haddock was nicely done, but again, and sorry to go back to it, but it is difficult to top the cheese souffle at Le Gavroche.  Dessert was crafted well and very Michelin starred in its presentation but with textures being the forte rather than the flavour.

This establishement is one of the institutions of the country owned and run by a family who soldier on in their obvious love of doing a fine job indeed.  Their experience was needed on a couple of occasions for the staff that were either new or younger additions or with language barriers (which almost generated frustration) but that’s what experience on hand is for.

All in all this was very nice to trial on a quick pass by and confirms that coming back in the Summer is a definite must to get the full picture. 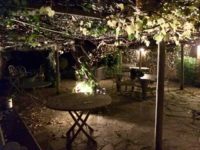 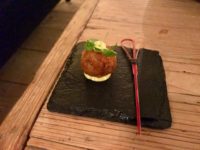 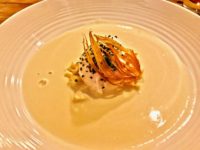 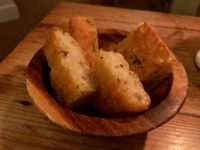 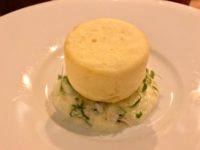 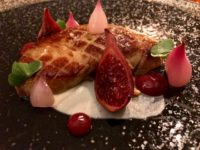 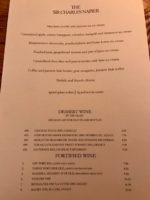 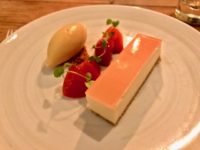 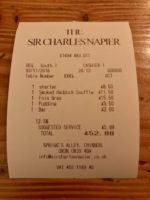 The evening bill for 1

Some staff in need of monitoring.