This is my second visit to Whatley Manor but this time with the new Executive chef Niall Keating to have taken over from the 2 Michelin starred and long standing Martin Burge.  Executive chef Niall previously hails from 3 Michelin starred Benu in San Francisco and 2 Michelin starred Restaurant Sat Bains in Nottingham.   The tasting menu now resembles a series of smaller dishes that have had obvious care and attention in their design and more importantly, many of which worked well.   I particularly enjoyed the fact that the chef de partie and Executive Chef himself were happy to bring some parts of the meal to the table.  There were some great moments of this meal and and overall I actually thought more of a food experience than my first visit which is a very good sign for its new concept.   The restaurant has a more formal feel in design, but is thankfully brought down to earth by down to earth staff.

I elected for the 12 course tasting menu and this was priced at £99 which is not unreasonable, especially when the results turned out to be as they were.  Pre-dinner snacks came in the form of spiced crackers with Japanese emulsion, rice oil, soy and lime which had lovely freshness and kick from lime.  Exmoor Caviar was also great to have in its unashamed glory on its own on the side.  Two types of Kimchi (fermented Asian vegetables) were also brought to the table – one with eel in tempura aigre-doux (meaning sweet & sour) which was outstanding and one with layered cold slices and daikon which was also refreshingly new.

Egg white custard, noodles, chicken broth, freshly picked mushrooms from afternoon & home made noodles & dashi kicked off the meal. These were very pleasant in texture, served with a clean broth and Autumnal sense of mushrooms done well.  An 18-hour prepared brown bread was absolutely outstanding bread to have: crispy, light, perfectly warmed, airy and served with buttermilk made to a buerre noisette with special ingredient (marmite)  with leak and onion ash sprinkled on top.  This was actually so stupendous I had to have another and the danger of this is that I could have kept going on this alone.

Mackerel came next with preserved raspberry & greens & edible flowers. Intense pickled soy broth with sweet of raspberries and crunch of the supporting bocama seaweed.  I found the latter quite sharp  and actually approaching the maximum level prior to discomfort.  The tortellini made with squid ink had 50% pork & 50% pork jelly with apples that had an almost cider quality.  This was very autumnal and worked well against the richness of the garlic vinaigrette.

The risotto had chorizo and black radish and was the perfect balance of spice and punch with a lovely textural crunch.  Halibut came next with charred alliums (bulb family of vegetables within the onion and garlic family) with pear & shiso which was light and very good.  I particularly liked the way the shiso was also calmed down by the pear well.  Squab pigeon was served with spiced date purée, fermented kohlrabi and pigeon glaze which had an almost hoi sin quality.  The heat in the background in the kohlrabi was not overpowering and was a workable, modern.  Aloe vera sorbet with beautifully soft grapes pieces, yuzu olive oil, was floral but toned down well and made for a very original pre-dessert.

Dessert itself was apple, caramel, passion fruit sorbet with honey comb.  The caramelised apples were beautiful but the honey on this dish was hard to spread meaning some mouthfuls got far more than others and with the already sharp passion fruit, I found parts of this dish overly sweet.  The waffle with black sesame gel and honey however, was absolutely superb (perfect texture & lightness) with my only observation being the sesame almost felt like taking the journey backwards to savoury again.  It was a very interesting concept nonetheless.

Home made sake had an unusual fermented bouquet  and was sweeter than the smell which was also original as an addition and the petit fours included salted caramel and black fig purée wrapped in coconut rice (like pudding) with coconut leaf which was inventive and pleasing.  The salted caramel petit four was utterly outstanding in its purée like form and this rounded off a meal that was highly accomplished.  Fusion food can so very often not work when handled in a way whereby the inventor thinks that contrasting flavours will be acceptable because they are different – they have to actually work and be innovative and pleasurable at the same time and in the main, Niall Keating has managed to achieve just that.

I’m very happy to see this restaurant gain a Michelin star based on this new menu and for me, this sits firmly in the upper bracket  of all 1 Michelin starred restaurants in the UK.   I would thoroughly recommend this venue if you have not been and are comfortable with originality and lengthier tasting menus.

Two types of Kimchi: eel in tempura and layered cold slices with daikon

Tortellini made with squid ink 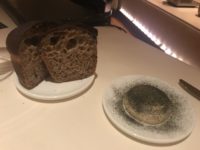 Round 2 of home made bread

This is beautiful hotel in the English countryside with its traditional, yet wonderfully comfortable interior and garden furniture exterior complete with croquet lawn and many other gardens to wonder around on a summer’s day.  The old stables have all been converted in to high end rooms and a particular nice touch is their bespoke cinema which can fit roughly 20 people in, each gaining a large, comfy seat and served a choice of home made sweet or salty popcorn.   The main reason for my stay however, was of course to experience the 2 Michelin starred restaurant and unfortunately the right-hand bullet points sum the experience up.  Wonderful place with skillful food, but a minor dissapointment for a 2 Michelin starred venue.

The dishes were undeniably attractive on the eye and beautifully presented but sadly I cannot remember a single one and have had to look at the photos to remind myself, which is a story in itself.  The amuse bouche was pleasing to have on the terrace with a pre-dinner drink and the tasting menu exposed real finesse in presentation but I simply do not recall any heart warming moments when dining.  Perfectly doable and a lovely thing to have, but sadly the highlight of the stay was more the location and experience of being there rather than the food. 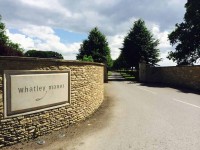 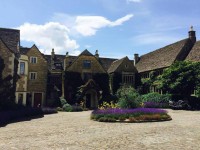 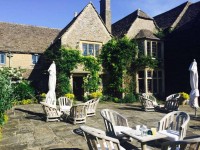 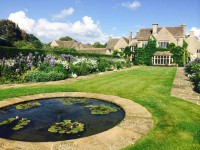 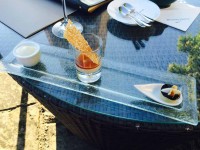 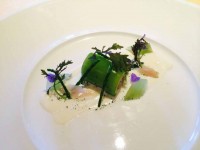 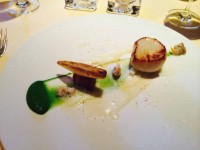 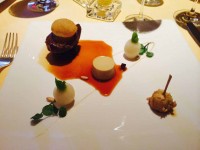 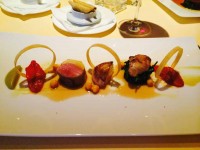 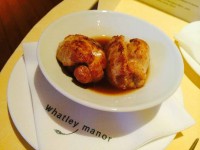 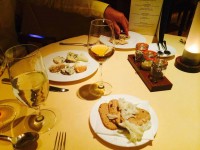 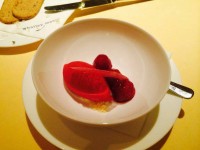 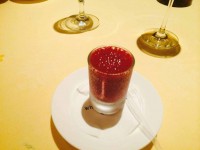 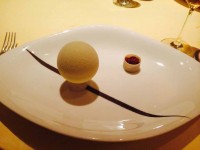 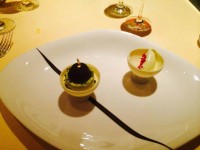 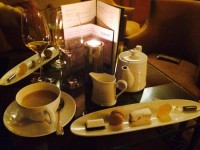 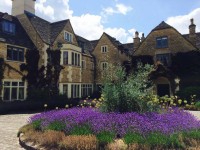