From the outside the Raby Hunt appears house and pub-like and on the inside, holds a very small bar and double-living room sized dining room.  The tasting menu only option is a collection of small sized offerings, some of which are painstakingly crafted, not least the garden salad dish using 40 different herbal and vegetable elements taking a reported (approx) 30 minutes to prepare.  This dish, along with the sea bream were outstanding and the bite size courses were all, bar one, pleasant to have.  As nice as these were though, the lasting feeling I had was that the meal was not substantial enough to merit being sated.   I would concur with the Michelin guide in that it belongs within the 2 Michelin star family (based on my impressions from visiting all the other UK options) and I did like aspects, but I would run back far more quickly to the likes of Le Champignon Sauvage or Midsummer House for the upper league and all round experiences at 2 Michelin starred level and this sits in the lower quadrant of its new family for me.

The first thing I noticed on this visit was the immediate and personable attention on entering as it is almost as if walking in to someone’s home.  That it might be, with the father of the head chef (James Close) on the front of house, working together when they can.  Another stand out element on initial impressions was the wonderfully colourful and well explained wine list which really was easy to follow and educationally interesting in its presentation.

And so, on to the snacks.  The cod skin crisp with yuzu zest and caviar was a belter of an opening – light, crispy and somehow juicy at the same time with a superb twang of citrus.  The artichoke crisp with frozen liver parfait was clever and needed to be eaten quickly and I opted for the addition of truffle shavings which were fine and decadent although I was surprised at the quanitity for the extra £15 which seemed a little steep for the few shavings – perhaps more was used than seemed.

The potato crisp, pomme soufflé in style was lighter than light, with gorgeously balanced crème fraîche inside and these three opening snacks gave the distinct impression of being in very capabale, culinary hands.  Unfortunately I didn’t like the heritage carrot confit spoonful with barley as this was just too oily and sour in taste.  I could see very clearly though that the style of these dishes and the lovely spoon had been influenced by the restaurant Geranium in Copenhagen.

The Australian wagyu was so tender that it almost didn’t require any chewing and the caviar gave it is the seasoning it was in need of – but only just for me.  It was in fact, in danger of not having enough salt but the beauty of the beef was the overriding factor for me here.  The sea bream however, was a piece of rare brilliance.  It wasn’t much to look at and actually I was a little dissapointed when it came because it simply didn’t look special, but the most perfectly brittle and seasoned skin with the freshest and most tender sea bream I have had with its supporting cod roe powder caused me to want the dish to take the most amount of time to eat as humanly possible and immediately made me want to have a glass of wine to accompany.  The English Davenport was a wonderful white to do this job the and appears to be becoming a well used resource (see Michelin starred Peels).  This was a superb dish and matching wine without question.

The winter garden salad using vast numbers of ingredients in one bowl was a delight particularly with its fried cabbage and got me close to the feeling of my experience at The Ledbury where I have had the finest salad known to mankind.  Pigeon is not my favourite but with the olive jus, dehydrated spinach powder, squab with star anise and smokey artichoke emulsion, one can see why the Michelin inspectors were keeping a close eye on this establishment and these made for an interesting combination.

The chocolate and olive crisp dessert was clever and brilliantly done but also strange in that it was the only sweet that was just about dessert size but was perhaps the pre-dessert – it’s difficult to tell.  It could have simply been dessert and the remainder of the mouthfuls of sweets including the ginger doughnut with honey tuile, lemon explosion and chocolate skulls were all petit four before the coffee, but these were presented on the menu so I took these as the actual desserts, which, were therefore, pretty small.

Whilst I’m on these, the cacoa butter shell of the lemon explosion with yuzu and lemon liquid cream inside was another offering that made me see where the stakes had been raised in its simply perfect texture and thin coating of a buttery shell, that was also sweet, with the burst of liquid as soon as the mouth had closed – a fine and fun moment.  The skulls were visually fun and a refreshing change of flavours in smoked pine salt and white chocolate in one and rosemary and yuzu in the milk chocolate skull, but other than that they were pleasant and original chocolates.

So, all in all, there were some moments of delight.  James Close, who has seemingly dined in a catelogue of restaurants across the globe has had inspiration from some clear winners out there and designed a precise menu.  At the same time, and for a menu, I was suprised about the portion sizes (the sweets for example would have been best served together) and the absence of any bread, as the latter is actually quite useful to fill gaps, mop up jus and sauces and a decent opportunity to show case different takes on butter.

My final feeling when leaving, based on the whole food experience, was very pleased to have done it, but it felt more of a series of finely done mouthfuls rather than a full blown meal.  My current, intolerance towards molluscs made me miss out on a reported 5 shellfish bites and add-ons to central dishes that I was unable to have and this could have affected the overall verdict so, those of you that can, you may find yourselves having a better experience than I.  To sum up, rather than wanting to happily skip through hay fields at the food afterwards, I left thinking “OK, where next?” with a smile. 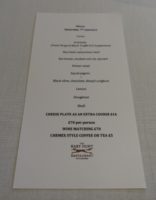 White chocolate with smoked pine and ‘the skull’ 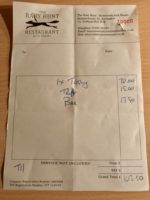